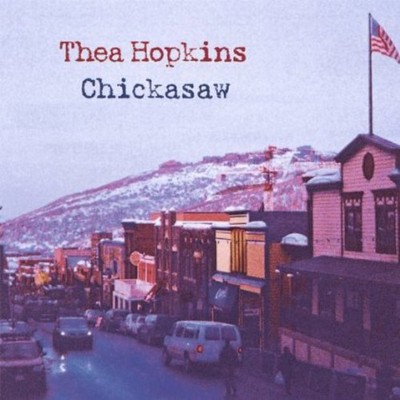 PRAISE FOR THE NEW THEA HOPKINS ALBUM, CHICKASAW "Thea Hopkins' new recording, 'Chickasaw,' puts her haunting voice front and center, and especially on her lovely self-written ballads, it's a voice with the mystery and power of the late, great Nick Drake." -- Susan Werner "This is what making good music is all about! I especially liked 'Jenny Danced.'" -- Tom Rush "Thea Hopkins possesses a voice and style that are so unique and brilliant that you wonder why the rest of the world has not yet caught on. She is sultry and sensuous, serious and playful, mysterious and fascinating all at once. She is reminiscent of the great torch singers, but also has a modern and contemporary sound which she shares with the likes of Sarah McLaughlin and Natalie Merchant. The bottom line is that she knows how to take an audience on a ride that touches the full range of human emotions. The beauty of Thea's voice is matched by the brilliance of her lyrics." -- Robert B. Schwartz, The Folk & Acoustic Music Exchange Acclaimed Boston singer-songwriter Thea Hopkins calls her music American Short Story Folk: concise, striking narratives, they tell of American romance and tragedy in modern terms. She is as inspired by great short story writers as she is by songwriters. Folk icons Peter, Paul & Mary, (who recorded her song "Jesus Is On The Wire" in 2004) described Hopkins as "one of the most literate, poetic and emotionally moving of the new singer-songwriters to arrive on the scene in the last few years". Her new album, Chickasaw, contains the work of pianist Tim Ray (Lyle Lovett, Jane Siberry), guitarist David Goodrich (Chris Smither, Peter Mulvey), bassist Richard Gates (Suzanne Vega, Patty Larkin), cellist Natalie Haas (Mark O'Connor, Alasdair Fraser), and guitarists Bob Metzger (Leonard Cohen) and Steve Sadler (Kerri Powers, The Swinging Steaks), among others. It was mixed by Chris Rival and mastered by the album's violinist, Ian Kennedy. Among the 12 songs are two of a topical nature, a new version of her Matthew Shepard story song, "Jesus Is On The Wire," and the anti-war "River of Fire." Chickasaw is Thea's sophomore album. Her debut album, 'Birds of Mystery,' was named one of the Top 10 local albums of 2001 by the Boston Herald. 'A gorgeous dusky voice wraps itself like mist around country-folk songs of tenderness and substance,' wrote Sarah Rodman. In February of 2005, the nationally syndicated radio program 'Acoustic Café' selected Thea's music for their monthly feature devoted to a new artist, 'One To Watch.' In 2004 in the Washington Post, Richard Harrington wrote that Peter, Paul & Mary's album 'In These Times' showcased 'several promising new writers. The standout here is Thea Hopkins.' (Thea's composition is the only new song to be performed in it's entirety in P, P & M's most recent PBS-TV show, the career retrospective, 'Carry It On.') In 2004, Thea's song 'Western Town' was included in the CD 'The Best of Boston Songwriters.' In the years 2003 though 2007, Thea received ASCAP Plus awards for songwriting. She won 2nd place in the 2004 Boston Folk Festival songwriter contest. Thea has opened for Richie Havens, Maura O'Connell, John Hammond, Ellis Paul, Susan Werner, Connie Kaldor, Tracy Grammer, Brooks Williams, The Burns Sisters, Kris Delmhorst and Katy Moffatt.

Here's what you say about
Thea Hopkins - Chickasaw.