Vision Through Sound - Cheer Up Chap Middle School Isn't Everything 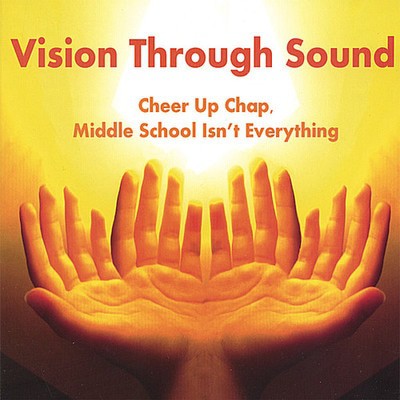 Young band, mature Vision August 24, 2006 Rafer Guzman in Newsday With an absurdist sense of humor and a jam-band sensibility, the Massapequa group Vision Through Sound comes across like a mix of Phish, Cake and Primus. You say you hate those bands? You should still pick up Vision's latest disc, 'Cheer Up Chap, Middle School Isn't Everything.' It's one of the most original and accomplished albums to come out of Long Island this year. The band has a knack for building catchy rock songs out of unlikely material. The first track, 'A Song for the Ride Home,' begins with a folksy, almost medieval guitar ditty that develops into a lighthearted sing-along. But by the end, it's become a bona fide rocker with a driving drum beat and fuzzy guitar solos. 'Something to That Defect' manages a similar trick, combining a silly chorus ('shoo-be-doo-wop-wop') with heavy, hallucinatory guitars. Singer Andrew Krolikowski has a way with words that can be initially off-putting: Sometimes he's impossibly verbose, while at other times he stretches out syllables as if trying to kill time. But at least once per song, a phrase will jump out and stick in your mind. 'How long can you hold your breath/Underwater/Without a cigarette?' he wonders in 'The Perks of Being a Vampire.' On 'The Bricklayer,' he offers some snarky advice: 'Why don't you tip the executioner? It won't do you any good/It won't put your head back on.' Krolikowski's strong, appealingly raspy voice lends his stoner philosophizing some authority. Vision Through Sound plays with the confidence and skill of a seasoned band, but the oldest member, guitarist Fran Berkman, is only 21. (The youngest, bassist Michael McManus, turned 17 this week.) You wouldn't know it to listen to them: They've clearly soaked up plenty of classic rock and fashioned their own distinctive sound. That makes them a rarity on Long Island, and one worth hearing.

Here's what you say about
Vision Through Sound - Cheer Up Chap Middle School Isn't Everything.