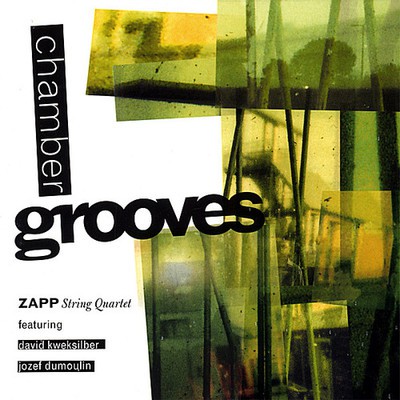 ZAPP STRING QUARTET '...one surprise after another...' '...Zapp, Holland's hardest swinging string quartet...' Zapp String Quartet is known to be Holland's most sparkling, hardest grooving string quartet. Zapp's approach is original and unconventional, their repertoire a diversity of musical styles such as improvised music, jazz, rock, world, classical and contemporary music. For this the quartet was granted the prestigious Dutch Kersjesprijs Award in 2005. All Zapp members are improvisers and soloists in their own right and compose or arrange music for the quartet. Besides their solo projects they have performed with a large variety of artists such as flamenco guitarist Eric Vaarzon Morel, trumpeter Eric Vloeimans and most recently as a part of pianist Michiel Braam's Nopera. With the Passaggio project Zapp has entered into a new, exciting direction. Composers from the Dutch jazz and improvised music scene such as Ernst Reijseger, Martin Fondse, Arend Niks and Guus Janssen wrote new works specially for Zapp. The CD received much acclaim and the tour wasa huge success. Jumping the Rocky Mountains After a number of very inspiring encounters during a Canadian tour in 2006, Zapp decided to take the Passaggio concept a step further, and invited a number of renowned American and Canadian musicians/composers to write new repertoire for them. They all were familiar with the quartet and there turned out to be a lot of mutual inspiration. John Scofield's rolling grooves, Mike Keneally's progressive rock and Zappa-background, the rich harmonics of Brent Fischer and the lyrical melodies in Michael Moore's music are perfect examples of the various angles that were chosen for this new project, which will be recorded in September 2007 and toured in Holland, Belgium, Canada, the United States and China during the 2007-2008 season. Zapp String Quartet: Jasper le Clercq - viool Friedmar Hitzer - viool Oene van Geel - altviool Emile Visser, cello.

Here's what you say about
Zapp String Quartet - Chamber Grooves.