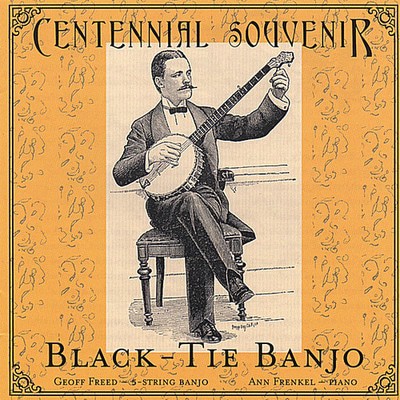 The Music 'Centennial Souvenir' demonstrates the tradition of five-string finger-style, or 'classic' banjo, played with piano accompaniment. Black-Tie Banjo has selected pieces composed over a span of more than 100 years, from the turn of the 20th century to the turn of the 21st. On this recording, Geoff Freed plays a nylon-string regular banjo as well as a five-string zither banjo, strung with three nylon and two steel strings. Background In the 1860s, a style of banjo playing emerged that became known as 'guitar style' because it was similar to the refined guitar-playing techniques of the mid-19th century. Unlike the 'stroke' style of banjo playing (the forerunner of today's clawhammer technique), guitar-style banjo required the player to pick the strings with the thumb and first two fingers of the right hand. This created a more melodious and legato sound than stroke style. In the following 30 years, guitar-style banjo-- also known as finger-style or, today, classic-- gained immerse popularity in the United States and England, particularly in sophisticated urban white society. Composers and performers sought to transform the banjo from an instrument associated with black culture and minstrels to one which was fit for 'high society.' By the end of the 19th century, America and England were in the midst of a banjo craze. Thousands of pieces for the banjo were published, from simple marches and dances to arrangements of operatic selections. Banjo ensembles, ranging from duos and trios to large orchestras containing a variety of banjo hybrids (such as the piccolo banjo, banjeaurine, mandolin banjo and cello banjo) mixed with mandolins and guitars, sprang up everywhere, especially on college campuses. Sadly, the popularity of finger-style banjo faded after World War I, eclipsed by a new music style, jazz. About the Musicians Black-Tie Banjo-- Geoff Freed, banjo and Ann Frenkel, piano-- are one of just a few classic-banjo ensembles active in the United States today. Their approach to the repertoire is expressive and refined, and their recordings demonstrate a sense of musicality not often encountered in this genre. In addition to playing the standard classic-banjo repertoire, they also perform many contemporary pieces by West Virginia composer and banjoist, Tim Mainland. 'Centennial Souvenir' is the second recording released by Black-Tie Banjo. Geoff is a classically trained pianist. He was inspired to learn classic-style banjo after hearing recordings by two British banjoists, William J. Ball and Derek Lillywhite. In addition to playing the conventional five-string classic banjo, Geoff also plays the zither banjo, as recorded on Centennial Souvenir. He had a brief encounter with bluegrass banjo in the mid-1970s, but nobody seems to hold that against him. Ann is a pianist, harpsichordist and singer, and has played keyboard instruments since the age of eight. She has a masters degree in musicology from Boston University. Ann's strong approach to accompanying makes Black-Tie Banjo's duet playing distinctive, with the two instruments treated more as equals rather than one simply providing background for the other.

Here's what you say about
Black-Tie Banjo - Centennial Souvenir.