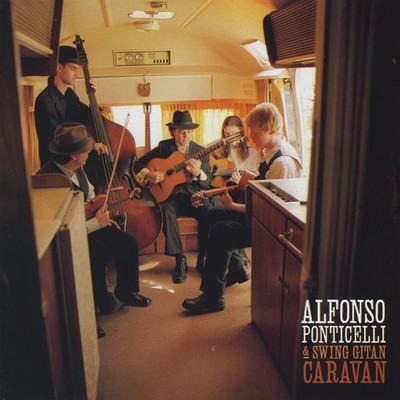 Alfonso Ponticelli and Swing Gitan is Chicago's premier gypsy-jazz band. The group plays the 1930s-style music of guitarist Django Reinhardt -- foot-tappin' swing played on acoustic instruments. It's a blend of the jubilant swing of early jazz with the feisty passion of gypsy music, plus a strong dose of guitar pyrotechnics and virtuosic improvisation. Formed in 2001, Swing Gitan features bandleader Alfonso Ponticelli on lead guitar and a world-class lineup of musicians on violin, rhythm guitar and upright bass, with the occasional special guest. Over the years, they've played with many of the great contemporary gypsy-jazz players from around the world, including Bireli Lagrène, Stochelo Rosenberg, Moreno, Angelo DeBarre and the Robin Nolan Trio. Around Chicago, Swing Gitan plays frequently at the Green Mill and Pops for Champagne. They've also played at the Chicago Cultural Center, the Field Museum, the Terra Museum of American Art, the Chicago Jazz Festival and the Chicago Summerdance Festival -- and they had the honor of performing at Millennium Park on it's opening night. Alfonso has studied gypsy-jazz music for more than a decade, having traveled several times to the annual Django Reinhardt festival in France. He introduced gypsy-jazz to Chicago in the 1990s, when he began teaching a weekly Django-style class at the renowned Old Town School of Folk Music, and he is often invited to teach his popular workshops at festivals around the country. A multi-instrumentalist, he won the 1994 U.S. National Mountain Dulcimer Championship and plays both banjo and guitar with the Illinois Philharmonic Orchestra. He's also a gypsy flamenco guitarist, having been to Cordoba, Spain, to study with the great flamenco guitarist Rafael Riqueni. At the Iridium in New York, Les Paul invited Alfonso to play as a special guest with his trio. Selected reviews 'Django Reinhardt clearly is alive and well and swinging in Chicago.' --Howard Reich, Chicago Tribune 'A special treat...All four musicians soloed marvelously.' --Lumino Magazine 'it was clear from the opening number that this band knew this music inside and out and were comfortable enough with it to throw in a few tricks of their own.' --DjangoFest Northwest review 'Chicago's pied piper of gypsy jazz.' -- Mel Bay Guitar Sessions.

Here's what you say about
Alfonso Ponticelli - Caravan.