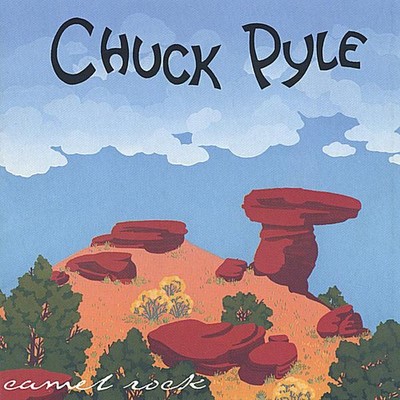 TO SOME, singer/songwriter Chuck Pyle is a walking contradiction. One reviewer labeled him 'the Zen Cowboy' for his delightful but seemingly at-odds mix of upbeat New Age humor and straight-from-the-saddle poetry. Deciding to, as he says, 'ride the horse in the direction it's going,' Chuck has taken the nickname to heart, shaving his head and blending Zen truisms with horse sense. His music mixes western themes, folk, rock, cowboy poetry and new age humor into his own unique 'Southwestern Acoustic' sound. The songs are at once complex and enchantingly funny. He compresses a story to it's very essence, quoting bumper stickers, proverbs, world leaders and old cowboys then mixing in his own philosophical blend of Cowboy Zen. An accomplished songwriter, Chuck's songs have been recorded by a number of popular artists, including Jerry Jeff Walker, John Denver, The Nitty Gritty Dirt Band, Suzy Bogguss, Tish Hinojosa and Chris LeDoux. The song 'Colorado' became the theme song for the PBS series, Spirit of Colorado, which is beamed world-wide by satellite. In 1980, Chuck wrote 'The Other Side of the Hill' which has been recorded by over 20 different artists including Chris LeDoux who renamed the song 'Cadillac Cowboy' and took it to the top of the country charts in 1991. But along with being a lauded songwriter, Chuck Pyle is a well-known performer in his own right. He has developed his own powerful and unique finger picking style which he calls 'Rocky Mountain Slam Picking,' which simultaneously emulates rhythm guitar strums and lead guitar lines making him sound like an entire band. He has taught guitar seminars at such prestigious events as the Puget Sound Guitar Workshop and the Swannanoa Gathering. Pyle, a native of Newton, Iowa, has lived on Colorado's front-range for over 30 years and has spent most of that time traveling the country playing theaters, festivals, colleges and coffeehouses. He has five albums to his credit, and is currently in the studio working on his sixth.

Here's what you say about
Chuck Pyle - Camel Rock.