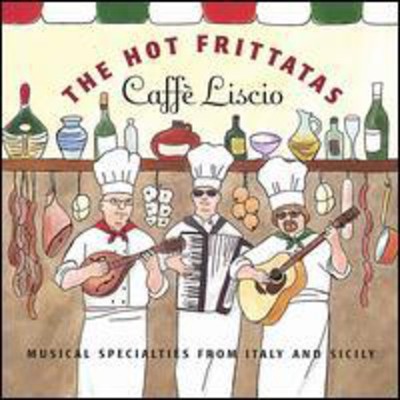 The Hot Frittatas is Northern California's newest ensemble for European musette style dance music. A trio of accordion, mandolin/fiddle, and guitar, they have appeared at numerous festivals, events, wineries and restaurants throughout the Bay Area, including the Santa Rosa Festa Italiana, the Cotati Accordion Festival, the Sausalito Arts Festival, and the 2001 Sonoma Harvest Fair. In addition to the traditional Ballo Liscio style of Italian music, they are equally adept at French café music, Klezmer, Choro, Tango, and even Cajun and Zydeco music. Their first CD, Caffe Liscio, was released in April, 2001. They will begin work on a second CD early next year, featuring more Italian music, French music and even some original tunes in the musette style. PERSONNEL: Gus Garelick (violin and mandolin) Gus discovered the mandolin during college and taught himself to play from an old Italian method book, his first introduction to the Ballo Liscio style of Italian dance music. Eventually, he started playing Bluegrass music, and turned his attention to American fiddle styles: Bluegrass, Western Swing, Cajun, blues and jazz. He has played fiddle for groups as diverse as Queen Ida, Dan Hicks, Hank Williams, Jr., and the late Jim Boggio and the Sonoma Swamp Dogs. He also played classical mandolin with the Berkeley Mandolin Ensemble.. Gus lives in Santa Rosa and performs with a variety of musical groups, including Hot Frittatas, the Cajun Coyotes, the Bar X Bunkhouse Boys, and the Sevastopol Klezmer Band. He is also a radio programmer at KRCB Radio in Santa Rosa, where he hosts The Fiddlin Zone twice a month. Dennis Hadley (accordion) Dennis began playing accordion as a child in San Leandro, California, studying polkas and waltzes of the great Frankie Yankovic. He also listened to a lot of Hank Williams, but had to put the accordion on hold during the British Invasion. No one seemed to be interested in rock n roll accordion-not until Cajun and Zydeco music made it's way out of Louisiana. Then, it was accordions, with a vengeance! Dennis joined Soleil Zydeco, a Sonoma County dance band, featured several times at the annual Cotati Accordion Festival. He then joined a more traditional Louisiana band called The Cajun Coyotes, at the same time branching out into Celtic, French, Italian and even Gypsy style accordion music. He still likes Frankie Yankovic, by the way, but with a touch of Clifton Chenier and maybe a little Italian flavor. Don Coffin (guitar, mandolin) Don has been performing music for international audiences for over 30 years. From 1971 to 1978, he recorded and toured with singer- songwriter Kate Wolf. He also traveled through Europe with The Eclecticatz, an acoustic trio playing everything from Celtic tunes to Country Swing. For many years, Don has been organizing musical events at venues throughout Sonoma County, and he continues to perform Irish music with his band, The Aires of Erin. Don also plays guitar in the Redwood String Trio, with violinist Paul Ellis. The Hot Frittatas is Don's newest musical endeavor.

Here's what you say about
The Hot Frittatas - Caffe Liscio.