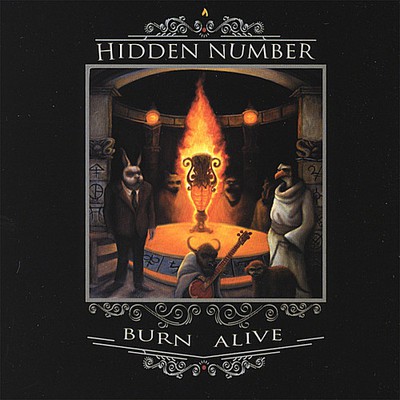 After collaborating for over two years, the current configuration of Hidden Number has completed their debut full-length CD BURN ALIVE in founding member/engineer/producer Dean Swanson's studio facility Magnets Large & Small. With creativity and technology always at close proximity, the band excels in the ability to tirelessly experiment and tediously craft their music, using the facility itself as a key instrument for their innovative narrative. Collectively, Hidden Number currently exhibits their live music in Northwest venues, having strategically dualized their studio and stage compositions. In addition to live guitar, bass, drums and vocals, synthesizers and samplers are utilized to perform the physical embodiment of careful studio experimentation. The three founding members of Hidden Number; Dean Swanson, Joseph Stuhff, and Shawn Diaz initially assembled as schoolmates in Las Vegas. Joe and Shawn collaborated in 3lbs, a cyclically gigging Vegas rock band while Dean pursued solo recording experimentation on his own. Further designation as trio was achieved through Swanson's recording of the first 3lbs demo. Upon momentum achieved through torrid five day lemon water fasting and completing a home made demo cassette, an uncertainly originated logical system was found while on an expedition through the surrounding wastelands of Las Vegas. Upon returning to solid material it was decided that musical and artistic talents would be unified to form a collaborative. This pivotal and transformative event prompted the trio to form the first incarnation of Hidden Number which became the initial impetus for studies based on their surprising discoveries. Faced with closed minds and a limited avenue for their artistic pursuits, the intuition that more pieces of the puzzle remained unfound began to grow and the three disbanded with the understanding that research would continue in Seattle WA. It was there that Swanson would found the Magnets Large & Small audio research facilities. Meanwhile, percussion expert Kai Strandskov studied Mathematics at Southern Oregon University and played drums in a number of local bands; Smidgen, Mono e Mono, Heroin{e} Martyr Coalition, Boba's Feet, Hamster Basket, and A Million Fingers. Upon graduation, he translocated to Silicon Valley for further studies relating to puzzling observations in the sub-fields of chaos theory and strange attractors. This work eventually directed Kai to relocated operations to Seattle where a mutual acquaintance, and avid collector of the arcane, introduced him to Dean, Joe, and Shawn with the expectation that both parties could reconcile their hitherto unresolved patterns of inquiry. Upon syncretism of both overlapping and discrete observations, the expanded group subconsciously summoned long time confidante and childhood Vegas companion, Richard Weisner, who on a whim arrived in Seattle after a sequence of long, vague journeys in the northern Nevadan mountains. Upon completing contributions to their first full length release BURN ALIVE, the eccentric keytar master promptly disappeared, and his identity was replaced with Joshua Anderson. Climactically, this event marked the appearance of the second incarnation of Hidden Number in parallel form as an outlet and focus for studies, while providing the benefit of continued funding. Hidden Number members bring diverse strengths and abilities to the collective whole. Dean Swanson, on guitar, synthesizers, samples, and vocals, is a freelance recording engineer and proprietor of Magnets Large & Small- a recording studio, independent record label, and audio research facility located in the Capitol Hill neighborhood of Seattle. Guitarist and vocalist Shawn Diaz, while competent on multiple instruments, previously lead vocalist for a number of bands, is currently visual artist/graphic designer and co-owner of Olivodoce Art Space. Joseph Stuhff, bassist, has performed in numerous Las Vegas bands, is a Hip-Hop artist for projects Priceless Game and Beatmaster's Guild, providing the solid backbone for Hidden Number's dense textures. Kai Strandskov, trained in mathematics and jazz drumming, embodies all acoustic/electronic drums and percussion, while providing backing live vocals. Rich Weisner, on keyboards and samples, is currently working as hip-hop producer and founder of Beatmasters Guild, a record label focused on innovative Hip-Hop and electronic beats for hire. Hidden Number's full-length release, Burn Alive, is scheduled for release August of 2007 on independent record label Magnets Large & Small. The band has extensive local and area gigging plans and West Coast tour, in support of their first release. The band members continue developing their musical dialectic, recording new material, working with numerous side projects and collaborators, continuing as participants and supporters of the local independent Seattle arts scene, and continually revising their exegesis through thoughtful study and peer review. ~.

Here's what you say about
Hidden Number - Burn Alive.