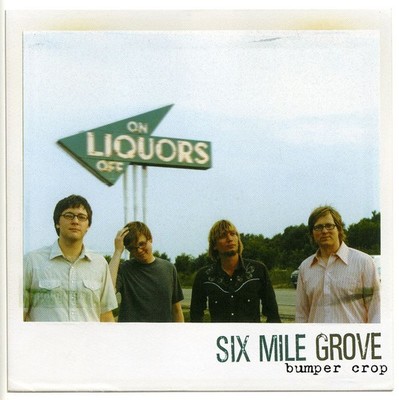 With roots generations deep in the cornfields of southern Minnesota, the band Six Mile Grove is flourishing like a well tended crop. Six Mile Grove was founded in 1997 in Lyle, MN (population 500) by brothers Brandon and Brian Sampson, Barry Nelson and Dezi Wallace. The soulful storytelling and no frills style of Six Mile Grove's music lend well to their Americana/Alt-Country/Roots Rock sound. Miles of Music aptly described their latest album Bumper Crop as "humble, organic country-infused rock with regular Joe heart and down home soul." After a year of touring with Six Mile Grove as his opening act and backing band, Bob Wootton (Johnny Cash's guitar player of 30 years) calls the band "the best thing to come along in the music business for quite a while." Critics and listeners agree. Six Mile Grove's latest self-recorded album "Bumper Crop" is charting and receiving airplay on Americana and Country radio stations in the US and Europe. "Bumper Crop" is a collection of "lonesome, spare balladry and buoyant bar-time beats (Pulse Magazine, Minneapolis, MN)". It is preceded by "Friction (2000)," recorded and produced by Lou Whitney at The Studio in Springfield, MO, "Long Distance Everything (1998)," recorded at Oar Fin Records in Minneapolis, MN, and "A Day's Work (1997) also recorded with Lou Whitney at The Studio. Six Mile Grove performs across the United States, from The Lion's Den in the heart of Greenwich Village, NY, to the South Park Music Festival in Fairplay, CO. They have shared the stage with The Kentucky Headhunters, Nitty Gritty Dirt Band, The Gear Daddies and Charlie Robison. Jeff Hanna of the Nitty Gritty Dirt Band said "Recently the Dirt Band had the pleasure of sharing the stage with Six Mile Grove. They really knocked us out. Cool tunes, great rootsy grooves, and not a wasted note. These guys are the real deal."

Here's what you say about
Six Mile Grove - Bumper Crop.