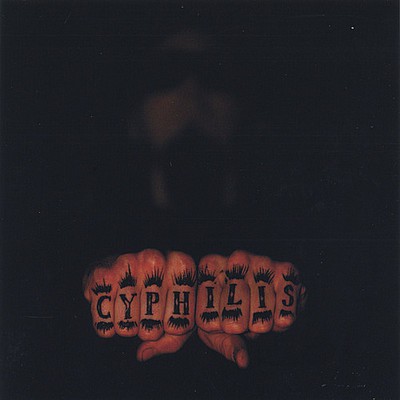 What's in a name? If you are going to focus on something, why not their unrelenting, heavy riffs, or their in-your-face live performances, their DIY record sales in the thousands, hell, even the symbolic work clothes the band wear onstage... 'Truth is, if you don't like our name, you're probably not going to like our music. What matters is that our fans do.' declares front man Nick D, when asked about changing their name. Drawing on it's members' metal, hardcore and rock influences to form a heavy, melodic riff-laden sound, Cyphilis has been impressing it's own brand of metal on their fans since 2001. Cyphilis' sonic style is unique, but to attempt describing it within the realm of known entities - the band combines elements of Pantera, Clutch and Prong with a touch of Hatebreed and System Of A Down. 'Our songs are usually pretty straightforward' says Germ, who writes the music, 'We aren't distracted by showing off. We strive to be deliberate, tightly wound, oddly melodic and heavy as hell'. Thousands of fans in and around the band's Wilkes-Barre, PA hometown, and thousands more throughout the world, have connected with the band's loud, aggressive style, thanks to the internet and impressive live performances. 'Our live act is like a kick right in the face. Period' Nick D suggests as an explanation of their fans' loyalty at pit after pit filled show. 'Our live show is to the point.' adds Deuce. A Cyphilis performance is indeed tight, powerful and purposeful - and their fans do respond. The demonic vocals of Nick D combined with Germ's steely riffs, and the full, driving rhythms laid out by Deuce and Feist are an impressive combination sure to incite any disciple of heavy metal, though it is not recommended for the faint of heart, or the average Hootie and the Blowfish fan. Word of the band's impressive performance has spread and the band has enjoyed opening slots for such legends as Kiss, Slayer and Judas Priest. The band has also has performed locally and abroad with their friends, and Hollywood Records'Breaking Benjamin, who has recently achieved platinum sales. Sales of Cyphilis' first EP Backwords (2003) and their full length Buff Shined Scars (2004), both self-produced and released, have reached nearly five thousand, and both releases spent weeks in the top ten local album chart. The band's blistering yet melodic songs have garnered impressive local radio airplay on WBSX 97.9X ('THE X') as well as national regular spins on XM Radio's LIQUID METAL (RIP) and the hard-alternative channel THE SQUIZZ. 'I liked it so much, I had to let the whole damn country hear it' relates Ward Cleaver, the esteemed DJ on The Squizz/XMLM. The band's third release Manifest (July 2005) is a solid 4 song EP which serves up a harder more aggressive representation of what's to come, . Delivering more infectious riffs and powerful vocals on 'Grinderparts', 'Trouble In The Eyes Of Our Maker', 'Hell's Half Acres' and the title track. 'You may not like our name, but you will never forget it... or us' quips Feist.

Here's what you say about
Cyphilis - Buff Shined Scars.