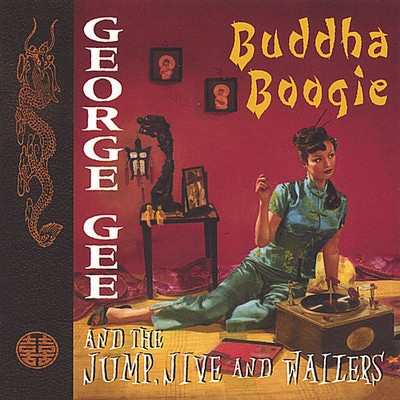 GEORGE GEE SWING ORCHESTRA (formerly THE JUMP, JIVE & WAILERS) www.GeorgeGee.com Rollickin' roadhouse boogie is the heart and soul of George Gee's Jump, Jive & Wailers. This electrifying 10-piece unit, created in 1998, places George's Co-Music Directors on double-duty: Tenor saxophonist Lance Bryant highlights the jump swing vocal traditions of Louis Jordan, Cab Calloway and Jimmy Rushing, while lead trumpeter Walt Szymanski delivers solid renditions of Frank Sinatra, Bobby Darin and Louis Armstrong favorites. An impressive sibling to the 17-piece Make-Believe Ballroom Orchestra, the Jump, Jive & Wailers configuration allows George's world-class cats plenty of room to let loose and really blow - resulting in stunning, high-energy rockin' grooves. And that devilish rhythm section peppers the mix with cutting-edge variations - delighting listeners and challenging dancers to keep it fresh! Bandleader George Gee fires up the crowds with his campy 'Hey-Ba-Ba-Rebop' antics. The real key to this band's power is the amazing level of interaction. The call-and-response jive on gems like Joe Williams' Every Day I Have the Blues between Lance and the band members is simply hilarious. The mighty horns are given broad freedom to chime in during bluesy solos - creating fresh supporting patterns with each performance. There is enormous synergy with the dancers; George's masterful musicians spontaneously translate the dancers' smooth moves to shape the next musical phrase. And then there is George - who one moment hushes the band to a walking vamp so low that you feel it more than hear it - then revs up and propels his Jump, Jive & Wailers into a decadent swing frenzy! The band already has a mammoth tour resume - including top swing clubs across the US, a two-week tour of top North Carolina concert halls, and powerful 'Battles of the Bands' in Los Angeles, Philadelphia and New York. George Gee's Jump, Jive & Wailers were the first modern era American big band to lead a swing dance in Tokyo. They were even summoned to perform for rocker Ozzy Osborne's 50th birthday party in Beverly Hills! The Jump, Jive & Wailers are supported by their groovy debut CD, Buddha Boogie (recorded at the world-famous Capital Studios in Hollywood, CA). Released in 1998, the record continues to enjoy extensive airplay. Equipped with a treasury of jump swing favorites as well as knock-out originals, this stunning band is guaranteed to raise the roof!