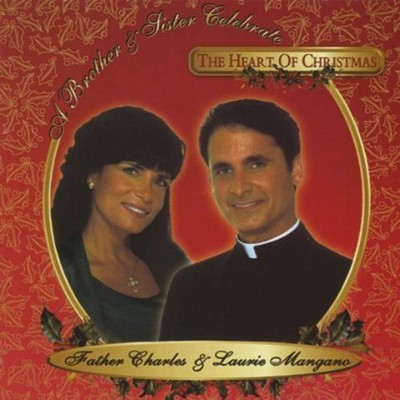 Biography of Father Charles and Laurie Mangano On a warm summer evening in 1999, a young charismatic priest stood in front of a microphone before 40,000 people in Lourdes, France. A deafening silence fell over the crowd as he began to sing the words of 'Gentle Woman', a ballad loving Mary, the Mother of God. Yet if this priest had listened to the words of a music teacher from his childhood this awesome moment would have never taken place. Father Charles' musical interests began at the age of twelve. Although his music teacher told him that he was tone deaf, he persevered through the encouragement of his family and the grace of God. Father Charles' love of music developed into a much deeper and stronger love - his love of the Lord. He was ordained a Roman Catholic priest for the diocese of Rockville Centre in 1990. Shortly after, he began to integrate his music into his priestly ministry. 'Through my music, I hope to bring people closer to God and to aid them in their journey toward wholeness and integration'. It was during his first assignment at St. Catherine of Sienna that people began to encourage him to share his gift of music by recording it professionally. It was then that Father Charles enlisted the vocal talent of his sister, Laurie, a wife and devoted mother, and successful model who has done runway work in Manhattan and gracing the pages of the New York Times and Modern Bride. As a child, Laurie sang for God in Church and discovered Him through song. As a result, she developed an intimate relationship with Him. As the years passed, she and other family band members won many awards, which paved the way for her budding solo career. This left her unfulfilled. "Performing was fun, but something very deep was missing. Singing for God gave purpose to my music." This invitation now gave her the opportunity to use her angelic voice to join her brother in song. And so Father Charles and Laurie's music ministry was born! This dynamic duo have appeared at countless venues from 'Nights of Recollection' at local parishes to sold-out concerts at Westbury Music Fair, the Tilles Center for the Performing Arts, Alice Tully Hall and Avery Fisher Hall at Lincoln Center, the Cathedral Basilica of St. James in Brooklyn as well as the Blue Army Shrine of the Immaculate Heart of Mary in NJ. They have performed internationally, but one of their most moving connections with an audience was with inmates at a woman's prison. The many cards, letters and emails they receive help them realize the hope that their music brings to all of God's people no matter where they are on their journey. Wherever they appear, their sold out audience is treated to a spectacular evening of a real musical feast celebrating the King of Kings, Jesus Christ. They had been called the best kept secret in Catholic music, but the secret is out!!!! Together they have released seven successful albums: LEAD ME LORD, I CALL YOU FRIEND, THE HEART OF CHRISTMAS, TRUST HIS HEART, CELEBRATE JESUS, A CHRISTMAS PRAYER and GOD'S UNBELIEVABLE LOVE along with producing videos and a DVD of their major concert events. Their 8th album, a 2-disc rosary CD, will be released shortly. They have completed 13 seasons as hosts of their own television show, a program of faith sharing, music and prayer on Long Island's Telecare Network and Brooklyn and Manhattan's The Prayer Channel. Whether it is through Father Charles' pastorate or their music ministry, their goal has always been the same; to convey the awesome love of God so that people will be touched with a renewed sense of faith and the courage to live it out. A by-product of their ministry has been donating to charity, including Little Flower Children's Services of New York, Catholic Charities FAN program, The Life Center of Long Island, Father Thomas Hartman Foundation for Parkinson's Research, Inc., Tomorrow's Hope Foundation for Catholic Elementary School Education, the Carol Baldwin Breast Care Center, the West Maui Domestic Abuse Task Force and Rolling Thunder (helping developmentally disabled children) and others. A portion of their album sales and concerts also go to charity. To date, Father Charles and Laurie have donated in excess of $320,000 to these and other worthwhile causes. Through their voices, actions and total involvement in their music, it is evident that God has raised them up for a very special work. These servants of God are certainly touching and changing hearts.

Here's what you say about
Father Mangano Charles & Laurie - Brother & Sister Celebrate the Heart of Christmas.