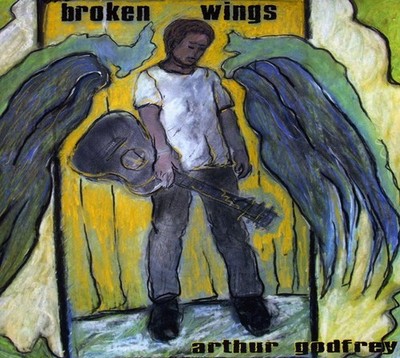 'The songs on 'Broken Wings' address some of life's most difficult trials: Race, Religion, War, Family, the Homeless, the Impaired, Death, and Self. For me, the jury came back with one verdict for all.... 'acceptance'. Our future waits for it's embrace.' --- Arthur Godfrey 'Take one listen to his gritty songs about life and surviving, and you'll recognize the soul of a poet. His music is raw and intelligent. Arthur Godfrey plays honest blues-tinged Americana up there with the best of them.' --- Performing Songwriter Magazine 'Arthur is the real deal and his new record proves it. Heartfelt, well-crafted songs are what I like and there is plenty on 'Broken Wings'. Give this man's new CD a chance or I will personally come and 'kick your ass' and don't think I won't.' --- Paul Thorn, Singer-Songwriter 'Arthur's 'take no prisoners' attitude is reflected in his absolutely genuine kick-ass performance style. His songs are raw, real and based on reality. He is the real deal.' --- Brian Rothschild, Director, John Lennon Songwriting Competition & Educational Bus 'Arthur Godfrey writes and sings night songs. They should be listened to in the evening. He is at his best telling the story of human brokenness, longing and need for connection. His voice is a raspy and unsettling instrument that demands to be taken seriously, and it is the perfect voice for his songs. Arthur is not kidding. There is something holy about putting your heart and truth on the line in a song. Arthur Godfrey does it beautifully. I salute him. 'Broken Wings' is a wonderful record. --- Mary Gauthier, Singer-Songwriter MUSICIANS, BROKEN WINGS: Arthur Godfrey: Vocals, Acoustic Rhythm Guitar Thomm Jutz: Guitars, Mandolin, Bass on 'I Hide It Well' - Nanci Griffith Band - Pat McInerney: Drums, Percussion - Nanci Griffith Band - Mark Fain: Upright Bass - Ricky Scaggs & Kentucky Thunder Jelly Roll Johnson: Harmonica - Played on over 50 Gold Records - Ericson Holt: Organ, Wurlitzler - The Mavericks - Shad Cobb: Fiddle - The Osborne Brothers - Robby Turner: Pedal Steel - Waylon Jennings - Richard Baily: Banjo - The Steel Drivers - Krystal Godfrey: Bass on 'Free To Be Me' Produced by: Thomm Jutz Thomm Jutz is a guitar player/producer living and working in Nashville/TN. He has worked with David Olney, Steve Young, Mary Gauthier, Michael Johnson and many other artists. He is also the guitar player in Nanci Griffith's band. He combines unique influences of Americana Folk and Roots music and his classical guitar studies in Europe. Thomm and Arthur have worked together on stage and studio for over four years.

Here's what you say about
Arthur Godfrey - Broken Wings.