Ronnie Caywood - Bringin It Back 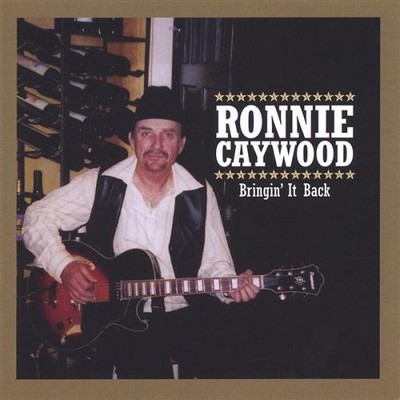 Ronnie Caywood, Singer/Songwriter/Guitarist who hails from Rockdale, Texas, began entertaining professionally in his early teens and continued while in college. During a stint in the Army, and while stationed in Germany, he entertained for various Military functions. He also played with several bands and was offered a spot as Lead Singer with one of the top bands. ? Due to his love for music, Ronnie has recently refocused his attention to his musical abilities and has been successful in playing and securing additional bookings at many locations across Central Texas and the Hill Country, including venues in Gruene, Georgetown, Double D and Comfort Café in Comfort; Hondo's, Lincoln St. and Silver Creek in Fredericksburg; Pontchartrain Grill in Kerrville, Riley's Bar B Q in Dripping Springs; Rockin' R Restaurant in Blanco; Piano Bar and The Ranch in Rockdale and also many private events. Ronnie has also auditioned at Nashville's Bluebird Café, sang at Tootsies, and participated in the Songwriters Night at Holiday Inn in Nashville. Ronnie was recently interviewed live on KOCR by Larry Simpson who actually gave Ronnie his first real start back into the music business. Thru Larry, Ronnie met our great friend and mentor, Mark Trail, who has put an extreme amount of time and effort into getting Ronnie and his music heard in the U.S. and abroad. He was also interviewed by Rodney Allen of WCRR and by Bill Gregory of KRXT in Rockdale where his songs have been played. His songs have also been played on KVET in Austin and in Europe. Ronnie recently participated in a Relay For Life Benefit at Hondo's on Main in Fredericksburg, Tx. and continues to play for benefits statewide when the opportunity presents itself. The benefits are very dear to his heart since he lost a brother to cancer three years ago. Having served in the Military, Ronnie knows what it means to hear from folks back home. Due to that influence, he has responded to an invitation to send some CD's to the troops in Iraq. Ronnie has just completed a CD entitled 'Bringing It Back' recorded in Nashville and Austin that is being released in late June 2005, which features two original tunes that he wrote, an original tune written by Mark Trail and Razzy Bailey, two other original tunes and several cover tunes. He is also featured on a Mark Trail Music compilation CD that was just released in late March 2005 with an original tune called 'I'd A Played Here For A Dime' which is doing quite well in Europe and the U.S. Ronnie is also featured on Mark Trail's MTM #11 which was released in late May with an original tune written by Razzy Bailey and R. N. Bailey titled 'Late Night Honky Tonk Country Song' and will be featured on still another Mark Trail compilation (M-T-M #12) to be released in late-July, 2005. Plans are in the making to be included in Mark Trail and Dave Schmidt's 2005 Christmas Album. He recently won Honorable Mention in two national songwriting contests. Ronnie is also scheduled to participate in a TV special that will be aired in the fall of 2005. Ronnie's strong vocal abilities and engaging stage presence allow him to entertain audiences with a wide voice range of cover tunes ranging from such artists as Roy Orbison, Van Morrison, Ray Price, John Hiatt, Marty Robbins, and Delbert McClinton to Merle Haggard, Johnny Cash, Willie Nelson and Waylon Jennings. His crowd-pleasing tunes range from Country and Alternative Country to a little Country Rock, Blues and Easy Listening. Claude Gray has been a great influence in Ronnie's music career also. Ronnie's distinctive performance style allows him to entertain virtually any audience. Comfortable in front of all crowds, large or small, in both public and private settings, he consistently offers excellent entertainment and remains true to his Texas Music. Ronnie is married and lives in Central Texas and is a member of the Austin Songwriters Group, a member of BMI and My Texas Music, and is listed in the 2005 Texas Music Directory. He is a member of the Austin Federation of Musicians and an Associate Member of the Academy of Country Music. He is also featured in an article in the April 2005 issue of Texas Rising Star Magazine out of Comfort, Texas.

Here's what you say about
Ronnie Caywood - Bringin It Back.