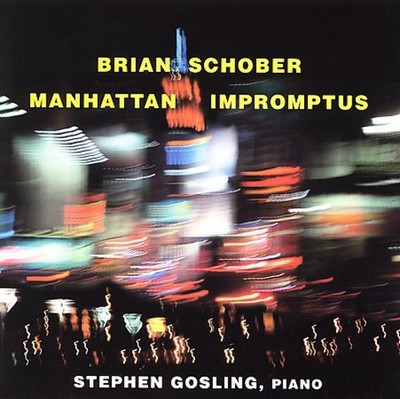 Stephen Gosling, pianist A native of Sheffield, England, Stephen Gosling moved to New York in 1989 to study with Oxana Yablonskaya at the Juilliard School. Gosling enjoys a varied career as soloist and chamber musician with a particular focus on the music of our time. He is currently a member of the New York New Music Ensemble, Ensemble Sospeso, Manhattan Sinfonietta, American Modern Ensemble, and Ne(x)tworks. He is additionally a frequent guest of many other groups, including the New York Philharmonic, Orpheus, the Chamber Music Society of Lincoln Center, Bang on a Can, and Absolute Ensemble. His work has garnered consistent critical acclaim, and he was profiled by The New York Times in October of 2005. Gosling earned his bachelor's, master's and Doctoral degrees at The Juilliard School, during which time he was awarded the Mennin Prize for Outstanding Excellence and Leadership in Music and the Sony Elevated Standards Fellowship. Gosling has collaborated with John Adams, Milton Babbitt, Elliott Carter, Steve Reich, John Zorn, Pierre Boulez, James Dillon, Brian Ferneyhough, Oliver Knussen, and Marc-Anthony Turnage. Brian Schober, composer Brian Schober has pursued an active career as a composer and organist throughout the United States and abroad. A native of New Jersey, Schober pursued his musical studies at the Eastman School of Music where his teachers included Samuel Adler and Joseph Schwantner in composition and Sue Seid and Russell Saunders in organ. He furthered his studies in Paris, studying composition with Olivier Messiaen and Betsy Jolas at the Paris Conservatory of Music while studying organ privately with Jean Guillou and André Isoir. Schober's music spans all instrumental and vocal media. His music has been performed by the Gregg Smith Singers, The New York Treble Singers, Voces Novae et Antiquae, the Kitos Singers, neXus Arts, Palisades Virtuosi, the percussion ensembles of The Juilliard School, Mannes School of Music and the University of Buffalo, and the New York Percussion Quartet. As a performer of organ music of all styles and periods, he has toured both the U.S. and Europe, particularly presenting concerts of new organ music. He has also performed with the new music group Speculum Musicae. He is the recipient of many prizes and awards including those from BMI, Editions Salabert, the French Cultural Ministry, the National Endowment of the Arts, The American Music Center and twice from the Aaron Copland Fund for Music. In 1984-5, he was composer-in-residence at the Center for Computer Music and Research at Stanford University under a Rockefeller Foundation Grant. A CD of works for chorus and organ recorded by the Gregg Smith Singers and the New York Treble Singers is issued by Ethereal Recordings, Manhattan Impromptus for piano, performed by Stephen Gosling, has been released by Capstone Records. His Wind-Space for alto flute, bass clarinet and piano was commissioned by the Palisades Virtuosi and recorded by them for Albany Records. His chamber opera, Dance of the Stones, was premiered by Nexus Arts in November 2010 at Theatre 80 in New York City to great acclaim and sold out houses. He is currently Music Director of the First Congregational Church in Park Ridge, New Jersey.

Here's what you say about
Brian Schober - Manhattan Impromptus (The Music of Brian Schober).