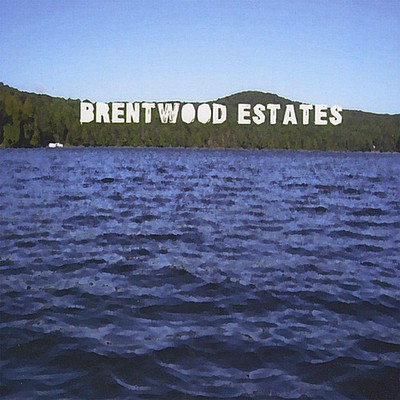 The collaboration between Jimmy Luxury and Tom Spiker known as Brentwood Estates began in November '05. Production for some sort of record began in September, but took a strange turn at the arrival of the notorious James Kelleher AKA Jimmy Luxury AKA Cobraman. You see, one afternoon during the first of a series of double bass tracking sessions (Jason Fraticelli was on upright, Spiker on electric...playing at the same time...check out 'Whiskey'), Jimmy just happened to stop by Spiker's Undercarriage Studios on his way home. Ironically, Jimmy was the only one who didn't drink the whiskey that day (it sure as hell sounds like he did when he launched into a 9 minute freestyle about the beverage). All of the lyrics that you hear on that song are 100% freestyled. In fact, all of the words on the entire album are freestyled, with the exception of a couple of the hooks. You just can't make that shit up...... Now a bit about the background of Jimmy and Tommy. If you're familiar with Jimmy Luxury's material with James D'angelo aka Odie K aka Tommy Rome back in the late 90's when he was signed to Sony, then you know what I'm talking about. Jimmy Luxury and the Tommy Rome Orchestra's music was featured in several Hollywood blockbusters, such as 'Oceans 11', 'Me, Myself and Irene' and 'Go' to name a few. Also, they made their way around the world performing with artists such as Iggie Pop and bands such as The Cure and G. Love and Special Sauce. Tom Spiker's guitar, bass, and engineering has landed him a bit of credibility as well. He's played all over the world and/or worked in the studio with artists such as Kelis, G. Love, John Medeski, Billy Martin and Chris Wood, King Britt, Sex Mob, members of the Sun Ra Arkestra, Groove Alla Turka (stand-in for Jamaaladeen Tacuma) Ari Hest, Tony C and the Truth and Steph Pockets. For this new record, he managed to assemble many of Philly's finest musicians; including G. Love (vocals, slide guitar and harmonica on 'Whiskey') and Chuck Treece (drums).