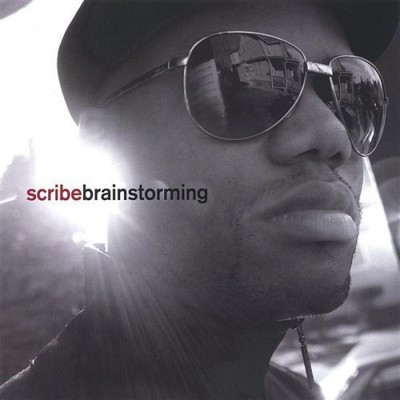 Scribe Experiences are the basis for most of music's greatest artists. Scribe is no exception. A celebrated rapper/songwriter/producer, Joshua 'Scribe' Colbert, a 24 year-old Pittsburgh, Pennsylvania native, delivers a highly anticipated debut album rich in emotion and lyrically textured on New Lyfe records, titled Brain Storming, spring 2005. Scribe blends hip-hop with enlightening lyrics accompanied by futuristic beats supplied by John 'Dirt' Sumpter and Franchise. Scribe is the essence of everything we love and miss about good music. Scribe, a self-taught musician, wrote and co-produced Brain Storming. 'I wanted to make music all of my life. I started playing drums when I was 7,' he recalls. 'My father had a drum set in the basement and my earliest memory of playing was on that drum set. There's something about music that that gives me divine fulfillment.' Scribe stumbled upon his lyrical gift via boredom from a high school chemistry class, where one day he put some words together that happen to sound good. The rest is history. Scribe has won numerous talent shows with an array of prizes including a golden mic trophy. He has performed at various churches, clubs and schools. He says, 'My success is held within my versatility. I can reach any person at any level'. His pre-release CD is found in CD players from men and women, boys and girls with ages ranging between six and sixty. Scribe's elaborate style and Gil Scott Heron reminiscent topics, profess an intellectual stream of elevated consciousness. Songs like, 'Head To The Sky', 'Illusion' and 'I'm On My Way', broadcasts a positive vibe that the world can instantly absorb. Scribe's debut CD Brain Storming is embedded with songs about Love, Spirituality, Awareness and something you can just bang in the ride. 'If you never chase a dream then you'll never catch it,' comments Scribe. It's this level of perseverance and originality that has set himself apart from the rest. Deep admiration for musicians like Jay-Z, Talib, Black thought, Victor Wooten, Richard Bona and Prince played a major role in shaping Scribe as an artist. Brain Storming, a timeless album came together after years of career-changing experiences, and has been more than two years in the making. While working on the CD, Scribe worked construction jobs, at a summer camps and working on airplanes for the Air National Guard. But he never lost sight of his dream. Instead, he stepped out on faith, quitting his job and going after his dream. He looks at this album and it's upcoming release as 'a great testimony to any one who's ever been told to go out and get a real job.' 'Success is an inner job, for me doing anything less than what brings me joy is not an option,' states Scribe. Brain Storming is music for the mind, body and spirit.

Here's what you say about
Scribe - Brainstorming.