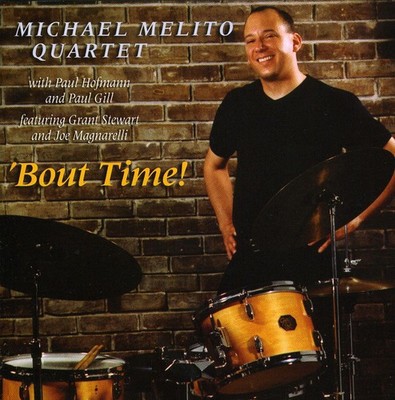 Jazz Drummer Mike Melito hails from Rochester NY. He started his professional career at age 16 playing with fellow Rochester natives Vibraphonist Joe Locke and Saxophonist Joe Romano. From then on gigs started to snowball for Mike. He started leading his own bands and freelancing all over upstate NY. Mike has recorded three CDs as a leader and is on countless CDs as a sideman. His drumming has been heard with some of the finest jazz musicians in the world. Some of the names he has backed include James Moody, Barry Harris, JR Monterose, Chris Potter, Eric Alexander, Cyrus Chestnut, Danilo Perez, Steve Turre, Chuck Mangione, Gene Bertoncini, Harold Danko, Clay Jenkins, Fred Wesley and many more. Downbeat jazz writer Chris Hovan says of Melito playing " He proves to be a talent deserving of wider recognition and as far as interpreting the mainstream, he does it just about as good as anyone else out there." This CD features three New York City jazz veterans Saxophonist Grant Stewart, Bassist Paul Gill and Trumpeter Joe Magnarelli who makes a guest appearance on Cedar Walton's Bolivia. Grant Stewart's playing credits include the great drummer Jimmy Cobb, Al Grey, Ryan Kisor, Larry Goldings, Peter Bernstein and countless others. Bassist Paul Gill spent a couple years touring with Diana Krall and has also played with Tom Harrell, Stanley Turrentine, Benny Golson, Louis Hayes, Eric Reed and many others. Trumpeter Joe Magnarelli AKA "Mags" was in Ray Baretto's last band and has also toured many years with Harry Connick Jr. and has also played and or recorded with Jack McDuff, Louis Hayes, Eric Alexander, Dick Oatts, Joe Lovano and others. The piano chores are held down by another upstate NY guy Paul Hofmann. Paul has backed such names as Kevin Mahogany, Karryn Allison, Richie Cole and Claude Williams. Hard Bop prevails on Bout Time having tunes by such notables as Freddie Hubbard, Cedar Walton and Tina Brooks. Four exciting originals and two "not done to death" standards also complete this CD. BOUT TIME continues to receive much airplay around the country.

Here's what you say about
Michael Melito - Bout Time.