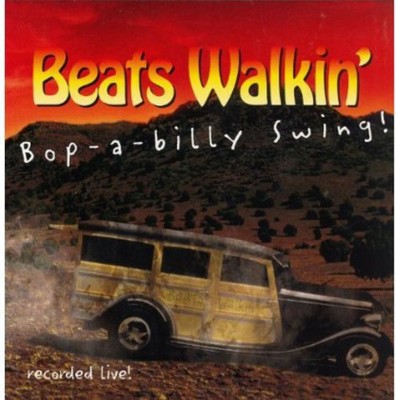 Beats Walkin': The Bop-a-billy Swing Band! Somewhere up in heaven, right this very moment, there's an incredible jam session taking place. The group assembled represents some of the most talented and creative individuals ever to inhabit the planet. Though most would find it impossible to fathom, jazz legend Charlie Parker is weaving his intricate horn lines amidst the soulful vocal of country superstar Patsy Cline. The rhythm section, led by the late drummer, Philly Joe Jones, is swingin' in a manner only possible among those who have been freed from all physical constraints. Every now and again, Elvis himself (who never did have such constraints) appears at the microphone for a little hubba-hubba. And for those of you still wondering what ever happened to Glenn Miller that fateful night his plane disappeared, the truth is now revealed -- he got offered the job as bandleader for this unlikely melange of musical talent and had to fly off in a hurry for the first gig! What exactly is going on here? That joyful noise you hear is called Texas Swing - an eclectic blend of jazz, swing, country, bluegrass, blues and boogie-woogie that'll have you smiling so wide your cheeks will hurt. Invented 'way down Texas way' in the 1930's by a cigar-chompin' part-time barber named Bob Wills, Texas swing blends the sounds of traditional big-band jazz with the western style influences of steel guitar and fiddle. Almost all major country acts today include a swing tune or two in their repertoires. But the sound is so refreshing, so infectious, and so damn much fun, that you can't help but wonder why they don't just play it all the time. Fortunately, there's now a new group on the scene that specializes in this unique musical form and has been delighting audiences across the east coast since early 1994. The band, appropriately known as Beats Walkin', consists of some of the east coast's finest musicians. Starting with punchy big band arrangements and tight vocal harmonies, they cook up a musical jambalaya that just won't quit. Bassist Bob Lewis and drummer Chuck Lindsay keep the pot well-stirred while vocalist/guitarist Wendi Bourne adds just the right amount of spice, supplemented by guest tenor man, Troy Corley and fiddler, Joel Glassman. Bandleader Jim Cohen blends in the special sauce: he's one of the few musicians in Philly who knows what to do with a pedal steel guitar and can make it cry or dance with just the flick of a wrist. Obviously, this is no ordinary band. This is an adventure in good taste. Whether it's western swing classics such as 'My Window Faces the South' and 'Sugar Moon', or it's 'straight-swing' classics such as 'Lady Be Good' or 'Honeysuckle Rose', or even jazz standards like Thelonius Monk's 'Straight, No Chaser', this is good-time music that's guaranteed to have you grinnin' all the way from Austin to Boston. For Heaven's sake, don't fight the feelin'. Come on down and have a helluva time! O. Dewey Lovett.

Here's what you say about
Beats Walkin' - Bop-A-Billy Swing.