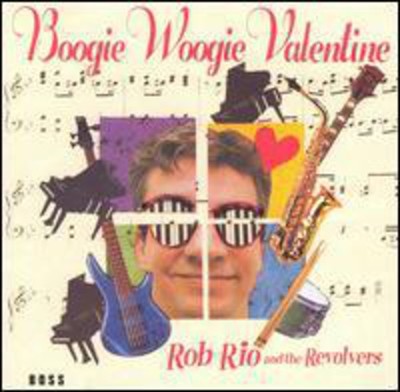 Los Angeles, 2006 Known by some as the 'Boss of the Boogie', pianoman/vocalist ROB RIO plays the boogie-woogie and jump blues of the 40's and 50's with a virtuosity and elan that has excited audiences around the world for more than 20 years. RIO has performed with many of the original blues greats, such as Muddy Waters, Willy Dixon, Charles Brown, Joe Cocker and many more, and has recorded with Mick Jagger, Canned Heat, Billy Boy Arnold, William Clarke, Coco Montoya, Finas Tasby and others, and continues to do session work. Born and raised in the Bronx, N.Y., RIO now resides in Los Angeles and currently performs at festivals, events and clubs at home and on the road and has been a favorite attraction throughout the Southland for the last 20 years, either as a solo performer or with his 5-piece band, THE REVOLVERS. He has starred solo for many years at the Arches Piano Stage of the Cincinnati Blues Festival, the premier showcase of boogie-woogie & blues pianists in the U.S. In 2005 RIO toured France and Germany to perform solo and with the top European practitioners of this uniquely American art form. He reprised his role as Jerry Lee Lewis in the 50's revue at the Kodak Theater in Hollywood and he joined boogie-woogie greats Bob Seeley and Carl 'Sonny' Leyland at the Ojai Blues Fest for a re-enactment of the boogie-woogie dream trio of Ammons. Johnson and Lewis . He brought his band to the Big Bear Lake Classic Jazz Festival for the 6th year for solo and band performances. RIO and lists several commercial credits along with 10 CDs under his own name. FAT GIRL BOOGIE, from his CD 'Bankin' on the Boogie' (Boss,1992) was picked up for '19 Super Blues' (Sony,1993), a compilation CD featuring Buddy Guy and Stevie Ray Vaughan, and also for 'Boogie Beat Vol. 2' (Ripete 2236, 1996). He recorded the title cut of his 'Fine Young Girl' (Boss,1994) with Billy Boy Arnold for Billy's Alligator Records release in 1994. 'Swingtrain' (Boss,1997) features 14 cuts, including 8 originals and 4 hot boogie-woogies. 'Boogie Woogie Valentine' (Boss,1999) features ROB RIO & THE REVOLVERS. 15 cuts, 55:17 total time, featuring 7 originals along with standards such as KANSAS CITY, SEA CRUISE and JAMBALAYA. Lot's of swing and boogie-woogie here! 'Rob Rio-LIVE!' (Boss,2001) is a live solo concert on DVD. Video and audio, piano and vocals only. 13 cuts, 56 minutes of pure piano! . The growth and maturity of Rio's playing and singing are evident throughout the 19 cuts on Back to L.A. (Boss,2003). The burning piano and humorous lyrics that are his trademark can be heard throughout the 8 originals here, including MY SWEET IVORY and FIRE IT UP! Also included are classics like Nat King Cole's GEE BABY, AIN'T I GOOD TO YOU and Pete Johnson & Joe Turner's ROLL 'EM PETE. Rio's latest CD, Boogie Woogie GOLD, (Boss,2005) is a compilation of 16 boogie-woogie piano instrumental nuggets culled from nearly 20 years of his recordings. RIO displays the prodigious chops that have earned him the title 'Boss of the Boogie.' Several boogie-woogie classics are covered, such as Albert Ammons BOOGIE-WOOGIE STOMP and CUTTIN' THE BOOGIE, Pete Johnson's DIVE BOMBER, KAYCEE BOOGIE and SWANEE BOOGIE and Meade Lux Lewis's HONKY TONK TRAIN. Also included are several Rio originals that shine and various interpretations of such masters as Jimmy Yancy, Cow Cow Davenport and Otis Spann. There's even a sparkling version of Erskine Hawkins'AFTER HOURS. All but 4 of the cuts have been released on previous Rob Rio Cds, but having all these nuggets together in one package is indeed a treasure! 'The best boogie- woogie player I've heard in a long time. He's really got it! ' Charles Brown 'I think Rob Rio plays as good as the very best pianist in the boogie music. He certainly has my approval.' Floyd Dixon '...a flamboyant pianist, dynamic performer, charismatic entertainer...' Greg Druest - KCBS FM '...a boogie-woogie virtuoso...' KEYBOARD Magazine 'Whether performing solo or with his smokin' band, Rob Rio's show is always a crowd pleaser.' Michael Kaufer - Foundation for American Roots Music.

Here's what you say about
Rob Rio - Boogie Woogie Valentine.