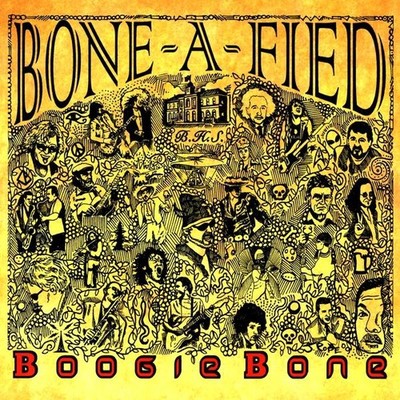 BOOGIE BONE'S SECOND RELEASE BONE-A-FIED GRABS YOU BY THE EARS AND WON'T LET GO! Some blues purists may be put off by the diversity of material from this powerhouse quintet emerging from Portland, Oregon, but it doesn't seem to bother them or their fans The Boneheads in the least. Boogie Bone explodes on this disc as they have on the fertile blues scene in Portland. Mild mannered, and good natured, until they reach full flash mode and all hell breaks loose. Most of the time using a blues base to explore other genres, but not afraid to knock down any walls that stand in their path. Their sophomore album begins traditionally enough with an old school slide guitar groove and dirty harp accompaniment that sound like it might have been laid down on the porch swing in front of a shack in Mississippi. But be prepared for a mule kick when the Avenging Angel enters in full battle array. Big and loud and demanding to be heard. Bone-A-Fied covers a wide range of blues influenced music. From the Zeppelinesque Avenging Angel to the neo-swing Boogie Bone Boogie. Other cuts like the New Orleans stylised Make it Easy, teary ballad Don't Mean A Thing, and traditional blues rocker Where's My Lady, keep the vibe and movin' and grovin' as the disc progresses. "We were raised on the blues music of our parents, Magic Sam, Paul Butterfield, Howlin' Wolf, but that gave way to the bands of our generation that took it to the next level" explains Boogie Bone singer Jake Johnson. "For us it was the bands like Led Zeppelin, Hendrix, and later Stevie Ray Vaughn that struck us. Bands with attitude, that weren't afraid to step on a few toes, that's who really opened our eyes to what the blues meant to us" added guitarist Steven Dee Williams. Boogie Bone is comprised of lifelong musicians that have played almost every genre of music in their careers. They came together as old friends returning to their roots and playing the music that moved them regardless of commercial potential. It is this approach that has endeared them to their fans, and fuelled the engine of creativity. The material is written by Williams and Johnson, with multiintrumentalistand Oregon Music Hall of Fame member (Shock) Steve Snyder, drummer Todd Stevens,and bassist Henry Gavladon filling in the grooves.

Here's what you say about
Boogie Bone - Bone-A-Fied.