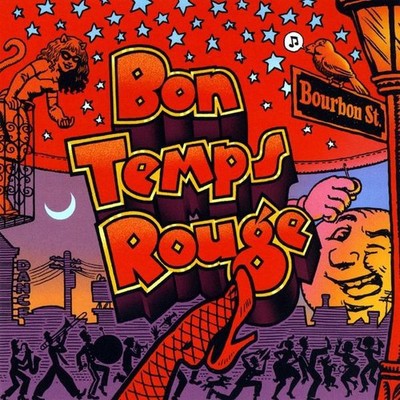 From the Pacific Northwest comes the second CD of original music and cool covers by the New Iberians Zydeco Blues Band. The New Iberians take their name from the gulf cost berg New Iberia, Louisiana, the queen city of the Bayou Teche, center of red pepper hot sauce production, and unofficial Cajun Capital. Firmly planting Louisiana roots in fertile Oregon soil the band took time from their busy touring schedule to capture eleven tunes showcasing band leader Evan Shlaes on accordion and Claes Almroth on harmonica, with Cajun enforcer Paul Bassette on Frottoir (washboard) and Michael Kersey on Bass and Fred Ingram on Drums. Guitar duties are shared by Steve Davis? and Clark Salisbury. W.C. Handy award winner Terry Robb co-produced the CD and also contributes a ripping slide guitar solo on one cut. The New Iberians formed in the late 1990's from the ashes of another local Zydeco group, Mumbo Gumbo. Left with bookings but no band, leader Evan Shlaes called on some old blues friends for help. Not caring for the old monicker he chose to rename the band after a recent visit to the Gulf coast. Initial objections to the new name were put to rest after their first Northwest gig, when some coeds from LSU showed up after seeing the name in the press, and the guitar player got lucky... Passing years have seen many personnel changes, but the core of the band, Evan on Accordion and Paul Bassette on Rubboard have remained central to the project. Evan was born in Chicago, Illinois and absorbed honky-tonk stride piano and blues guitar before moving to Portland, Oregon and embarking on a career as a concert sound engineer. A visit to the Rose City by Queen Ida sparked an interest in Zydeco Accordion, and it wasn't long before he was playing squeezebox in between sound gigs. Paul Bassette was born in the Northwest to Acadian parents and kicked around various occupations after leaving the Navy, including running a peepshow at the 1962 Seattle World's Fair. He became the percussionist for the legendary pH Phactor Jass Band, and owns one of the West Coast's premier vintage shops, Portland's Avalon Antiques. A common interest in Louisiana music and old things (Evan owns a notorious, glorified junk shop called Really Good Stuff) brought them together in 1998. The band's current line-up, with Claes Almroth on harmonica and sharing vocal duties with Evan, dates from 2007; "Bon Temps Rouge," their second album (a live album was released in 2002) gets it's name from the accidental mispronunciation of Bon Temps Rouler (Let the Good Times Roll) by an intoxicated MC. It also spawned the title song, which translates as Good Times Red, a charming fable about a scheming New Orleans sweetie. The CD opens with a sizzling Zydeco reworking of Fat's Domino's "Hello Josephene," vocal and arrangement by Evan, then an original Dave Edmunds inspired rocker, "Goin' to the Levee," written in 1996 about the spring flood that inundated much of hometown Portland. Claes Almroth, who besides being the leader of his own Blues band is also a native of Sweden and a scholar of American roots music, sings the next cut, Clifton Chenier's Black Snake Blues. Another original tune by Evan is next,"Terry Anne," a pean to love and good cookin', followed by rousing Zydeco treatments of Leadbelly's "Rock Island Line" and Bobby Freeman's "Do You Wanna Dance?" The Belmont Waltz was written originally as a ragtime piece, but was repurposed for the album and now is a regular in the band's live repertoire. The solo instrument in the last chorus is a bowed saw(!) Voodoo Juice, another original by Evan, is an one chord East Texas Boogie. The CD concludes with a quick rockabilly tune by Buck Owens and a Zydeco version of Johnny Nash's "I Can See Clearly," a popular number in the mostly soggy Pacific Northwest. 'Lonesome' Walter Cryderman plays the guitar solo.

Here's what you say about
New Iberians - Bon Temps Rouge.