Tom Dempsey - Blues in the Slope 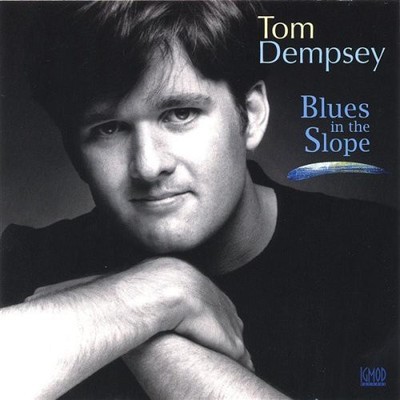 Tom Dempsey - Guitar Kris Jensen - Saxophone/Flute Luis Perdomo - Piano Tim Ferguson - Bass Scott Latzky - Drums John 'Smiley' Wilson - Drums Tom's critically acclaimed CD, 'Blues in the Slope' features eight of his original compositions along with Tom's arrangement of the classic Al Green song 'Let's Stay Together'. Steeped in the tradition of jazz, this CD contains an aural freshness that has captured the interest of jazz fans around the world. Over the past ten years, Tom Dempsey's reputation in the New York jazz scene for excellence, sophistication and artistry has, and continues to receive widespread acclaim. In recent years Tom has performed and/or recorded with a virtual 'Who's Who' of world renowned jazz musicians including: Jim Hall, John Abercorombie, John Scofield, Tal Farlow, Buddy Montgomery, George Coleman, Kenny Barron, Roy Haynes, Jack McDuff, Gerald Wilson, Mel Torme, Richard Wyands, Muhal Richard Abrams, and Dave Brubeck. Since 1992, Tom has been performing as a leader and a sideman at some of the top jazz venues throughout the U.S., Europe and Japan. He has made numerous appearances on New York radio and television including performances on The Rosie O'Donnell Show, the HBO series Sex and the City, and WQXR radio. Dempsey is also active as a studio musician performing with a number Broadway shows including 'Bring in 'da Noise, Bring In 'da Funk', 'Aida', 'Momma Mia' and 'Beauty and the Beast'. Tom is also an Artist Endorsee for Yamaha Guitars and J.Demonte Guitars from Buenos Aires, Argentina. Along with his active performing career, Tom Dempsey's talent as a composer is also receiving noteworthy attention because of his distinctive sound and style. With over fifty compositions, Tom has often been called upon to provide ensembles with his original works. Tom received his Bachelor of Music Degree in Jazz Studies from Mason Gross School of the Arts at Rutgers University in May 1991. In May 1996, he acquired his Masters Degree in Jazz/Commercial Music at Manhattan School of Music. Tom's deep commitment to education has made him a highly sought after educator and clinician. In recent years he has been teaching in the Jazz Studies program at SUNY New Paltz, working as a Visiting Lecturer at Rutgers University, and Director of the Jazz Summit at the National Guitar Workshop. His new book, 'Classic Jazz Styles for Guitar' is available through Alfred Music. Emerging from the tradition established by Charlie Christian, Wes Montgomery, George Benson, Grant Green and Jim Hall, Tom Dempsey is an exceptional talent who continues to draw critical attention. '...an exceptional young talent...' George Kanzler The Star Ledger '...a vivaciousness to the music that keeps drawing attention' Dale Smoak Cadence Magazine 'The next young jazz guitarist that people will talk about.' Gil Fuller Composer/Arranger 'Dempsey combines fine musicianship with fine compositional ability and stylistic accessibility' Eric Madis Victory Review '...a fine guitarist with versatility, chops, and emotive depth.' David R. Adler All Music Guide '...a very fluid, expressive way of playing' Eric Elias Just Jazz Guitar.

Here's what you say about
Tom Dempsey - Blues in the Slope.