Billy Blue - Blues in My Room 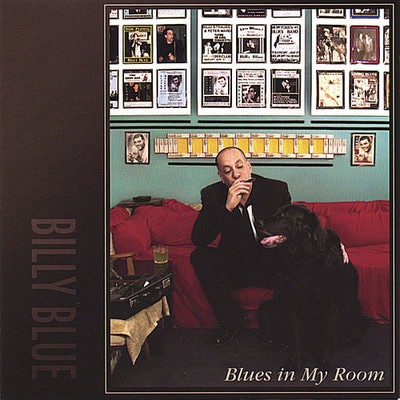 Singer/ Harmonica player Billy 'Blue' Strauss is a 30 year veteran of The Blues who has lived and played in New York, San Francisco, and Boston. In 2000 he moved to Worcester, MA and put together a new line-up for The Billy Blue Blues Band with New England blues guitar veteran Pete Henderson, bassist Brian Rost, and drummer Justin Berthiaume. In 2006 the band recorded Blues in My Room. Mr. Blue moved to Portland, OR in 2008, where he continues to sing, play, and write about The Blues. Special guests on Blues in My Room are "Sax" Gordon Beadle on tenor saxophone, Doug "Mr. Low" James on Baritone Saxophone, Scott Aruda on Trumpet, and Bruce Bears on piano and Hammond organ. Also Dave Maxwell plays piano on three tracks. ABOUT BILLY BLUE IN HIS OWN WORDS: Liner Notes from Billy Blue - Blues in My Room I was born and raised on Long Island (Lawn-Guyland!). I got into the Blues in Buffalo where I started at SUNY in 1976. Shakin' Smith was the first harp player I ever knew (a great Sonny Boy guy) and The Governor's Inn was the first Blues club I ever went to - it was owned by Lucky Peterson's father. In 1980 I came back to New York and started going to Bill Dicey's Sunday Blues Jam at Dan Lynch Bar on 2nd Avenue, near 14th Street. The drummer was Charles "Honeyboy" Otis - he was a very cool cat. All the New York players were there, including Bob Shatkin, a great harp player who became my mentor and a good friend for many years. There were some big shows in NYC in the early 80's - I saw Big Walter at Tramps twice and Muddy Waters at My Father's Place (Roslyn, LI) a bunch of times, and the Thunderbirds and Stevie Ray were playing all the time. We hung around a lot with Kim and Jimmie, and helped get the two of them on MTV in 1986 - it was the first time anyone ever played live at the MTV studio. That same year I met Jerry Portnoy in New York and he told me all about the Blues scene in Boston, so off I went. Sugar Ray and the Bluetones, Roomful of Blues with Ronnie Earl, Luther "Guitar Jr." Johnson and Duke Robillard were all playing in town regularly, and most of the national acts were coming through as well. We used to see the Bluetones almost every week. Over in Cambridge, Silas Jr. was running the Sunday Blues Jam at the 1369 Club. "Earring" George Mayweather was featured each week, and just about everyone starting out back then was a regular. I spent a lot of Sundays at the 1369, and did my first Boston gigs there with Mudcat and Peter Ward. In 1988 I started The Billy Blue Band with Mike Dinallo. I also spent some time in San Francisco that year. I saw Little Charlie and the Nightcats out there and got to know Rick Estrin - he was and still is the coolest harmonica cat. I also went to LA and sat in with William Clarke and Rod Piazza in the same weekend. I got to know William pretty well too. As a Bluesman, he was as real as it gets. Not long after the earthquake (yikes!) I moved back to Boston and picked up again with Mike Dinallo, this time as Billy Blue and the Blazers. We played until 1990, when the band told me one day that they were quitting. You may not believe this, but the date was February 15th, the day that Little Walter died. During most of the 1990s, I gigged only sporadically and was definitely not part of "the scene," but I did spend a lot of time playing The Blues at home. I didn't think so at the time, but I realize now that these were my truly formative years. For one thing, I started getting into Little Walter like never before. You could say I became a "born again" Walter guy, since Walter is where it all started for me in the first place. The culmination of my "Walter Decade" came in 1999 with the completion of my Little Walter Discography 2000, a very (some said insanely) detailed written analysis of all of the songs that Walter recorded for Chess under his own name. It was a big hit with harp players, and I hope to do a revision of it soon. In 2000 I moved to Worcester, MA. Worcester was home of the great Blues club Gilrein's and a pretty decent Blues scene. Soon I was playing out more than I had been in Boston. Gilrein's closed in 2002 (bummer!), but that same year I hooked up with Pete Henderson and The Billy Blue Band was reborn. We've managed to keep on keepin' on ever since and the result was this recording; I hope fans of "True" Blues will enjoy it! Billy Blue.

Here's what you say about
Billy Blue - Blues in My Room.