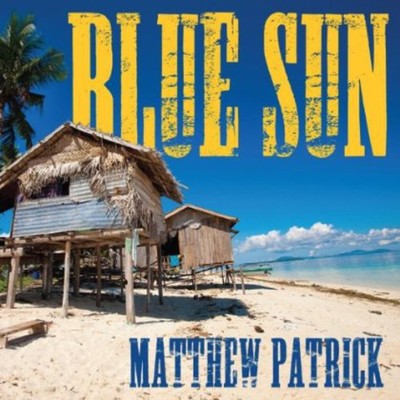 MARYLAND BASED ROOTS ROCKER MATTHEW PATRICK TURNS A RANDOM DREAM ABOUT AN OLD MUSICAL FRIEND INTO A GRITTY "REDNECK REGGAE" REALITY ON HIS NEW FULL LENGTH PROJECT 'BLUE SUN' -PRODUCED BY JACK O'HARA OF 70's COUNTRY ROCK BAND EGGS OVER EASY Usually when musicians talk about dreams, they mean the kind that fuel ambition-and Matthew Patrick had plenty of that in the years before he recorded Blue Sun, his new full length country-blues-roots influenced set whose soulful and eclectic vibe he likes to call "redneck reggae" or "Memphis meets Kingston." Starting with a fascination with slide guitar, Robert Johnson, and the Rolling Stones, Matthew Patrick had plenty of drive over the years, launching his career in college as a roots rocker in 32-20, which released two popular indie albums and opened for numerous blues and classic rock acts. Settling in Maryland after a whirlwind life that took him from Poughkeepsie to Palo Alto, Williamtown (MA) and Seattle, the multi-talented singer/songwriter launched his latest band, Muskrat Sally, as an acoustic blues outfit before switching to electric and tearing it up playing everything from Robert Johnson to Wilson Pickett. That's when he had the other kind of dream, a subconscious visitation from an old friend that changed his musical fortunes and led to the unexpected creation of Blue Sun. Patrick, who lives in Frederick, MD, woke up with a vivid picture in his head of Andrew Seidel, who he hadn't seen since their high school jazz band days in California. He decided to Google Seidel, who-most serendipitously-was living only 45 minutes away in Hyattsville, where he had a recording studio. Seidel had also recently released a reggae CD under the name "Andrew Diamond." "I was in the process of putting together new songs for my next project," says Patrick, "and as a few of them were in the reggae vein, I looked him up. We re-connected, and Andrew took my scratch vocal and acoustic guitar tracks, hooked me up with a Jamaican bassist named Lyndon 'Ace' Webb, and knocked them out of the park. They sounded so good that I took all of the other tracks I had been toying with and decided to follow the same path on those. It was really fun to take songs that I had originally conceived as country songs or New Orleans tunes and to see how Andrew and Ace would translate them. I have always loved music that crossed racial and social boundaries, from Chuck Berry playing straight up country on 'Maybellene' to Elvis playing Arthur Crudup's 'That's Alright Mama,' and the blues/rock/reggae hybrid we created fit right into that concept." Working with longtime friend and producer Jack O'Hara-frontman for the renowned early 70s country-rock band Eggs Over Easy-Patrick then laid down his own sharp guitar licks onto a colorful sonic landscape which included exciting contributions from organist Brian Mitchell (Levon Helm Band), pianist Austin DeLone (Elvis Costello, Fabulous Thunderbirds), guitarist Ben Fraker (Patrick's 32-20 band mate playing wicked "honky tonk Telecaster), and harmonica players Brian Veditz (of Muskrat Sally) and David Barnes. Blue Sun's 11 tracks find Patrick expressing, either straightforwardly or tongue in cheek, the gamut of emotions that come from being a family man. He wrote the lilting, vocal harmony rich "Blue Green Eyes" when he first met his wife-a kind of classic "let's give it a whirl" song. He feels that "Dog" perfectly captures the album's multi-cultural musical synthesis," while the bluesy story song "Too Old To Die Young" takes a whimsical view of life after a serious moment in Patrick's life-almost being run off the road on his bicycle on the way home from work. Other key moments reflecting happier moments along his life's journey are "I've Got Love" and "Ramblin' Rose," the latter which features O'Hara's sparkling guitar work. "Guess I've Gotta Do" is a tune about being the fill-in for the proverbial "dream guy," while classic styled bar tunes like "Drunk" and "Bikes, Bullets and Beer" (the slogan of a short lived venue on Maryland's Eastern Shore) show the lighter side of Patrick's artistry.

Here's what you say about
Matthew Patrick - Blue Sun.