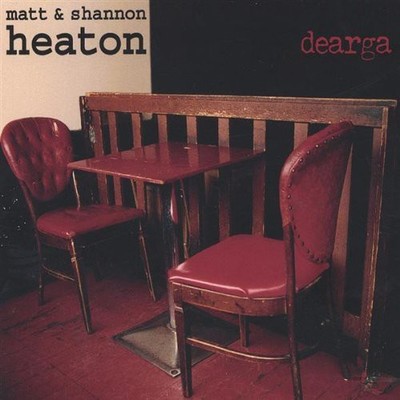 Matt & Shannon Heaton play traditional and modern Irish music with vocals, guitar, bouzouki, and Irish flute. They combine some of the best aspects of traditional music (exciting and soaring instrumentals)with home-grown American song-craft. Blue Skies Above is the duo's 2006 release. Also from the Heatons: Dearga, released in 2003, and 'Fine Winter's Night' (Celtic Christmas album) released in 2007. -------------- Matt and Shannon Heaton pair original songs with traditional Irish flute and guitar numbers. An unusual blend of material? Sure. But a natural one for this Boston-based husband-and-wife pair, who has retained trad music chops while becoming involved in the rich Boston acoustic music scene. Call it Irish Americana, or modern Celtic music-Matt and Shannon's shows feature stunning musicianship, an easy rapport with audiences, and a selection of music you won't hear anywhere else. Acoustic Guitar magazine summed it all up: 'Matt nails it all down with his highly textured guitar playing.' His rhythmic integrity and inventive harmonic ideas provide a rich framework for Shannon's timeless, evocative lyrics-and her stunning Irish flute playing. By bringing in wood flute riffs and backing vocal parts that blend with agile guitar lines, the Heatons offer a big, layered, modern sound. On their latest release, 'Blue Skies Above' (March 2006), the Heatons offer a seamless blend of traditional and original music, adding occasional electric guitar, drums, fiddle, banjo, and accordion whenever tracks called for it. Shannon explains, 'We never sought to make the old world new-we just went with what was in our heads and hearts. We have some guest musicians on the CD, but made sure that every track on the record could be recreated live, with just the two of us." 'Matt and Shannon Heaton combine lilt and contemporary sensibility, and sidestep the expected treble timbre of Irish music... Their songs are standouts.' Sing Out! Magazine Shannon's mom started her out on the piano at the age of 3. Four years later, she was living in Nigeria and learning flute and whistle from her Belgian neighbor. Throughout her early days, she was exposed to a number of traveling musicians and folklorists who would stay with her family while passing through town. When she settled in Chicago for college, she became involved in the Irish music scene on the north side of the city, where she really started to hunker down to learn traditional Irish flute. She'd spend nights at sessions in the city, summers in Ireland, and has been playing tunes ever since. After a disastrous start on trumpet (at age 12 he entered a competition, as unprepared as he could have been), Matt fled to the guitar. For $35, he landed a Harmony Electric at a rummage sale in Shadyside (Pittsburgh), complete with amp and new butter dish. Through college he played with surf-rock band The Flavor Channel, fronted neo tango quartet Orquesta Atipica, turned pages and sang in the choir for his organist father, and studied classical guitar... before settling on Irish guitar. Matt has no family ties to Ireland-he's as olive-skinned a trad player as you're likely to meet-but a longtime love of the music drew him to it, and meeting Shannon in Chicago sealed the deal. From Chicago, Matt and Shannon moved to Boulder Colorado, where they formed Irish trad band Siúcra with singer Beth Leachman. In 2001, they moved to Boston where they worked as sidemen for some of the Celtic music world's best performers. In late 2003, they decided to emerge as a duo and recorded their debut disc, "Dearga." They began building their reputation in Celtic music circles, and also more general acoustic music crowds at folk venues and festivals throughout the country. Their sophomore effort, "Blue Skies Above," takes it's title from Shannon's self-penned last verse of the traditional song "The Blackbird", highlighting the Heatons' style of merging traditional and original lyrics and melodies. "Harvest Time" pairs early 20th century courtship with modern low whistle and fiddle solos. And for the lovely instrumental, "Belle of the South Shore," Vermont musician Sam Amidon adds clawhammer banjo strains, fusing traditional Irish and American music worlds. Other guests include percussionist Paddy League, Scottish singer/accordion player Emily Smith, New Zealand fiddler Jamie McClennan, and singer/fiddler Laura Cortese. Matt and Shannon Heaton are keeping their horizons bright with a sunny collection of music, a growing fanbase, and a touring entourage that fits in a compact car.

Here's what you say about
Matt & Shannon Heaton - Blue Skies Above.