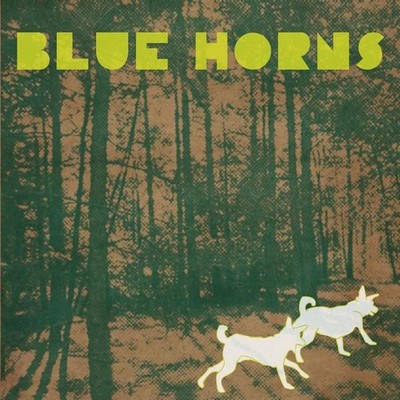 'Blue Horns has the punk aesthetic of 1970s pioneers Television, but the mass appeal of Bowie. What was once just a Portland band with promise is on it's way to gaining a reputation in the Northwest scene.' -Seattle Weekly "Brian Park's vocals have a joyous, snotty energy, and the whole band sounds like the soundtrack to a glorious, sun-baked Portland summer." - Portland Mercury "Blue Horns has quickly emerged into a real player on Portland's pop scene." - Willamette Week "A blissful insanity in their execution that gives that band more substance (and less predictability) than other more polished bands of the same ilk." - Willamette Week 'Blue Horns self-titled debut is a piece of pie, full of promise; wicked success may be on the horizon' - Citizendick.org 'These guys are like Television's kid brother, just wanting to have a bit of actual fun.' -Fingertips" From the dark woods of Portland, OR, Blue Horns have been converting the beautifully dressed and charmingly demure denizens of their city into wild-eyed beasts, taken in by the band's pummeling beats and warbling cries. Numerous raves about shows at Holocene, Backspace and Towne Lounge along the likes of Starfucker, The Evangelicals and Hockey have vaulted them toward the front of a new batch of bands emerging from the northwest. Blue Horns rose out of an evolving cast of Portland musicians recruited to fill out the songs written by Brian Park over the last three years. Blue Horns came together in '07 as the most collaborative of these incarnations. At this point, a more focused eye fell on all parts of the songwriting..lyrics, guitar interplay, the visceral nature of the drum beats..all of these things put into place send each song running head over heals at the listener. In addition to Park on vocals and guitar, Blue Horns features Colin Howard (guitar, vocals), Brian Kramer (drums, vocals), and Andrew Stern (bass). The band has been playing shows relentlessly all over Portland for the last year and a half shaping their sound and relationships with other great local bands. Focusing on smaller face-to-face clubs gave the band a more immediate reaction from the crowd on the evolving sound. The crowd has steadily grown with the venue size leading to a raucous album release at Portland's Backspace. The Record was recorded in a weekend in July of '08 with a few overdubs added at Old Standard Studio in Portland. The recording survived a flood and postponed the record for over a month before the band was able to go in and frantically lay down the final touches. Blue Horns is 8 tracks of rolling drums, agile bass lines and frenetic guitar lines interplaying with one another as if the band resides on Marquee Moon and the yelps and howls of Park's unique vocals bring to mind classic T. Rex or the more contemporary Wolf Parade. Standout tracks include 'Shotgun Wedding', 'Let's Go Hunting' and 'Ships Sink.'

Here's what you say about
Blue Horns - Blue Horns.