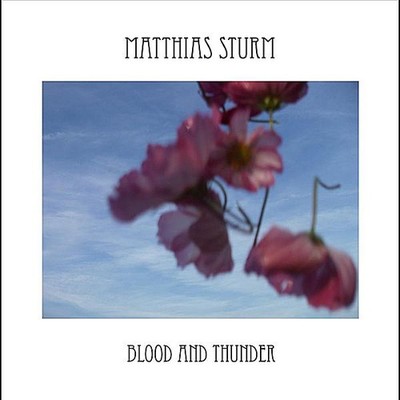 For Immediate Release: Matthias Sturm releases Blood And Thunder in the U.S. on Tuesday, January 17, 2012 Contact: Jo Rae Di Menno, Press Agent at 512.554.2799 and at [email protected] for further information, interview requests and jpgs. "Sturm's vocal execution and lyrical metaphoric contrast is remeniscent of Roger Waters' more recent work in theme and scope. What puts him in a separate class from the Pink Floyd frontman is that the music has a more layered depth, and is more melodic." Shoentel Music, Los Angeles "These songs are cool, very different than anything I've ever heard.'' Mike Galaxy, BandPromote.com Promotions "[The] music is beautiful and [I] appreciate the uniqueness of the instruments and sound...reminds me of a strange mix of the Beatles and Pink Floyd..." Geoff Koboldt, CEO of Out of Step Entertainment (Austin, TX - October 31, 2011) The new album by Matthias Sturm, Blood And Thunder, produced by David Hillis (Pearl Jam, Afghan Wigs, James Blunt) was recorded at Blind Melon's studio with musicians such as two time Grammy nominated songstress Erin Alden and drummer Dave Krusen, who once anchored Pearl Jam as a founding member. This all-star album collaboration, which drops on Tuesday, January 17, 2012, conveys a subtle and colorful mix of Folk, Avant Garde, and French Chanson garnished with cinematic soundscapes and embellished by the remarkable, heartfelt voice of the singer. Matthias likens his music to "stepping into a Byronesque universe inhabited by muses." 15% of the annual total sales revenue at CD Baby will be donated to WWF, World Wide Fund For Nature for Animal's welfare. Matthias Sturm hails from former East Germany and attended the Academy of Fine Arts in Dresden. He was part of the Bohemian art movement and was also involved in the early formation of the illegal punk music scene. After the Wall came down, he became one of East Germany's youngest and most talented painters. His art is part of some of the most important art collections in Germany, Austria and the USA, as well as in numerous private art collections. Matthias has and enjoys a recently growing fan community in the Benelux States where Belgium popstar NOVASTAR recruited Matthias Sturm for supporting slots in his 2008 tour in Belgium and Holland. The artist has performed on club tours and larger venues across Germany, Austria, France, Belgium, India and the USA, amongst some legendary stages like the AB (L' Ancienne Belgique) at Brussels. Matthias Sturm was highlighted at the HDFEST in Los Angeles in 2008 and was also selected for the Open Hearts Amnesty International Tour. Recently signed to W.O.A. International with a management and license deal for India and the Middle-East, he performed the W.O.A. Indian Summer Tour 2009. In July 2011, Matthias was a nominee of the 10th Annual Independent Music Awards for Short Form Music Video for his song "Blood And Thunder", the title song from his new album. This year Matthias was back on stage for the W.O.A. International India Tour 2011 in asscociation with VH1 in October/November, pioneering independent music in India which included a performance at the International Music Festival at Goa in front of the Indian Minister of Power, Mr Alexio Sequeira.

Here's what you say about
Matthias Sturm - Blood & Thunder.