Steve Osheyack - Blink of An Eye 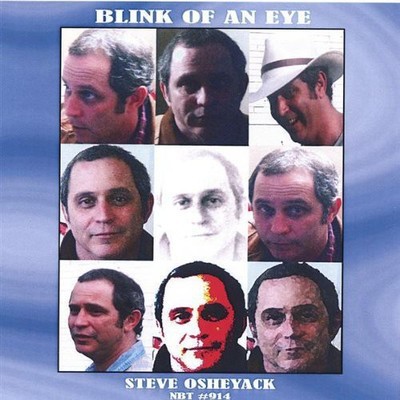 Osheyack who? Well, just because you don't know him doesn't mean anything. The point is you should get to know him. Osheyack is an acoustic, singer-songwriter in the vein of early Dylan. You can also hear the subtle influences of Croce, and other song writers who sought honesty in their work. He believes strongly in the power of music to change people's lives. 'Each time I sit down, with pen in hand, my goal is to write a song that has the ability to evoke real images in people's minds,' says Osheyack, 'and I strive to have each and every one of my works be an honest representation of myself and the world I live in.' And live he does. Osheyack is the father of five children, ranging in age from 17 to 9 years old. His music career took a backseat to the working life, while he supported his king-sized family. Over the years, Osheyack has worked as a journalist, a tower worker climbing around on 1,000 foot television broadcast towers, a parole officer and most recently with the developmentally disabled. Osheyack's songs ring true with all the gritty realism of someone who is directly connected into the working world. Osheyack states, 'I made a decision early on in my life, when the children started coming and my songwriting dreams flickered, that I would approach my whole life as an artist. From raising children, to all my work in the human services field. This kept my creative juices flowing and saved me from being just another bitter, frustrated artist.' But now that the children are older, the time is right for Osheyack to fully explore his songwriting talent and with this collection, he flexes his full range of skills. What follows is the mind and motivation behind each of Osheyack's songs in this original collection. 1. Blink of an Eye - 'This song was written as a reminder to myself and others about the need to enjoy each and every day for what it is, because it all disappears very quickly when you're busy doing something else.' 2. Welcome Back The Folks - 'My personal salute to Guthrie, Dylan, Peter, Paul & Mary and all those who spoke the musical truth, before rock-n-roll blew them off the road. This is a song that I am particularly proud of.' 3. Sixteen Years - 'This song was written for my wife on our 16th wedding anniversary. I consider it to be one of my crowning achievements...both the marriage and the song.' 4. Footprints in the Sand - 'David Koresh, Columbine, the Unabomber, Bosnia and other assorted crazy people were dominating the news. This song was written in the wake of their madness, trying to find that higher ground.' 5. The Lucky Song - 'Twenty-two years of marriage, five kids, two cats, a dog and a rabbit. I just consider myself to be very lucky to still be in the game of life. It took some work to get here and it wasn't always pretty, but I wouldn't trade it for anything.' 6. The Most Important Keys - 'A friend of mine was going through a divorce and this song was written for him as a reminder that he was lucky to get out alive.' 7. Holy Grail - 'This is one of those pieces that I think had more to do with me than anyone else, although at the time I fooled myself into believing it was about someone else. I was searching for something and I was living with more than a little conflicted thinking about what's important in this world.' 8. Catnap's Worth - 'This song is about the realization that I wasn't going to give up on my music, even though I was on a detour.' 9. Say A Prayer - 'A song written in a moment of doubt. Wondering out loud if my family would still be there, if I all of a sudden was a bum.' 10. Mr. Jones - 'I learned early on that the only way to keep your head above water as a middle class guy, was to stay away from the TV, telling me all about everything I needed to be happy.' 11. Whistle beat - 'It's not an anti-religion song. It's' sort of my own folk version of Lennon's Imagine.' 12. Refuge - 'This is a working man's song. All the struggles and pain that drains a man at work, melts away when he walks through the front door of his home. My family is my rock.' 13. Todays for Tomorrows - 'A moment of doubt, I suppose. This song is me wondering out loud if I made the right choices in life.' 14. Can You Tell Me Where I'm Going? - 'Another song about a man (me) doubting his direction in life and wondering out loud if it was the right path.' 15. '66 Mustang - 'I owned a '66 Mustang at one point in my life. I used to sit behind the driver's wheel even when it sat idle in the driveway, just pretending to drive it. I loved that car.' 16. Years Pass Us By - 'A reflective song about what happens to a splintered family.' 17. It Ain't Alright - 'A happy ending for two brothers who traveled different roads in life and were fortunate enough to put the bs of life aside long enough to find each other.' 18. Place In The Stars - 'I'm getting to the age where people I know are starting to die on a regular basis. This is a song about recognizing what's important, before it's' too late.' 19.(Bonus Track) Grandpa Joe - I was having a conversation with my music publisher about my song '66 Mustang, and he told me about the '66 Dodge Charger that was purchased brand new by his Father-In-Law, and which he still owns. This song was written upon request, in memory of Grandpa Joe...and his car. Thanks for stopping by. - Steve Osheyack.

Here's what you say about
Steve Osheyack - Blink of An Eye.