Border Blasters - Blast from the Past 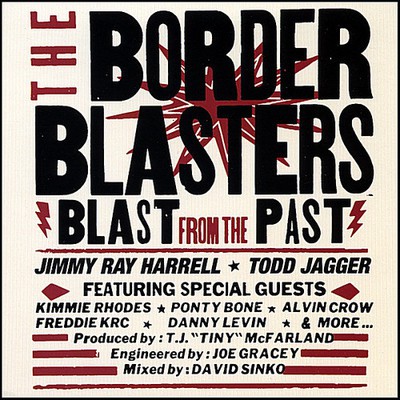 #2 BEST OF 2008 CD by Freeform American Roots DJs in it's category! TOP 20 for FOUR MONTHS on the same chart in 2008. #14 on the EURO-AMERICANA chart in 2008. The Border Blasters are Official Showcase Performers for the International Folk Alliance Conference (2009), the Southwest Regional Folk Alliance Conference (2008) and Kerrville Folk Festival main stage performers (2009). 'You make more music than any two guys I've ever heard!' - Johnny Gimble 'As musicians, Jagger and Harrell are both consummate professionals - nimble and at ease in performance. Roots entertainers in the true sense of the word, they not only draw from the catalogue of the early blues and country performers, but, like those performers, can engage and entertain a crowd with nothing but themselves, their voices and their acoustic instruments.' - Andrew Stuart, Feature Writer, The Desert Candle Kerrville New Folk Award Winner Jimmy Ray Harrell and Austin Music Award winner Todd Jagger are The Border Blasters! Veterans of the Austin music scene, Jimmy Ray and Todd have been making music together since their first gig at Gruene Hall in 1975. The Border Blasters's sound is a melting-pot of blues, real country, western swing, bluegrass, folk - all sewn together with tight blending harmonies and raw musicianship. Their music connects with people of all ages. The Austin-American Statesman says: 'You can't get enough!' Music City says more: 'Years of experience knit this ensemble into a smooth, ingenious sound, provoking even staid listeners to at least chair-dance. Jagger & Harrell's long Austin history includes gigging at the legendary Armadillo World HQ, the Skyline Club and the original Soap Creek Saloon. Typically Texas eclectic, Jagger's virtuoso mandolin style melds country, bluegrass and blues, while Harrell plays guitar, accordion, piano and more. [The Border Blasters]'s smooth harmonies and lively performance will delight even the most discriminating music fan.' 'Blast From The Past' features an all-star lineup of Austin music legends on both sides of the studio glass: T.J. 'Tiny' McFarland, producer; Joe Gracey, co-producer & engineer, and special musical guests Kimmie Rhodes, Ponty Bone, Alvin Crow, Freddy Krc, Danny Levin and more. In addition to their musical careers together both Harrell and Jagger have lent their talents to other bands as well. In the early 90's Todd was the mandolinist with the Austin Lounge Lizards and appeared with them at the Kerrville Folk Festival, Kuumbwa Jazz Club, the Strawberry Music Festival, on NPR's Mountain Stage and many other venues. During this time the Lizards won 'Best None of the Above Bands' for two consecutive years at the Austin Music Awards. Todd also was given Honorable Mention as Best Mandolinist in the Austin Chronicle and Music City readers' polls. Jimmy Ray, as part of the popular duo 'Lou-Ray', won the New Artist Award at Kerrville New Folk Frestival, and was featured on the main stage at the Kerrville Folk Festival and on the 1975 festival LP. The Border Blasters divide their time between Austin and the Davis Mountains of Far West Texas. You can also tune in to the Border Blasters Radio Revue every Thursday at 11am on KRTS-FM, 93.5, Marfa Public Radio where the boys dish up a heapin' helpin' of good Texas and Americana roots music, and sometimes they'll get out their axes and play a few themselves.

Here's what you say about
Border Blasters - Blast from the Past.