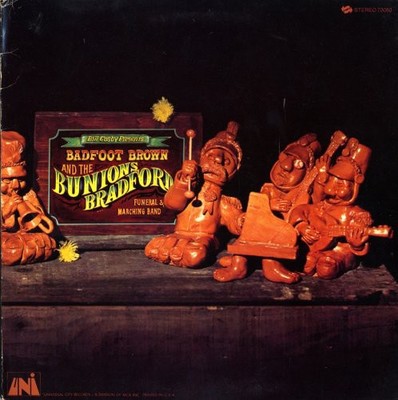 Badfoot Brown & the Bunions Bradford Funeral & Marching Band was released in 1971 by Bill Cosby and a mysterious, uncredited group of musicians (all but one, the great percussionist Big Black on bass drum, on side one). The sound of this record reveals a Cosby who so many folks have only encountered as the guy who sold Jell-O Pudding Pops in commercials, as Dr. Huxtable on TV, or for his early 21st century tirades against Black materialism and the gangster side of hip-hop culture; it reveals a persona few could ever imagine. Cos is a very complex man and always has been. These two tracks offer a slice of the Cosby mystique as a jazz composer who dug the entire tradition of the music and saw it as a means of expressing non-verbal emotions. The album originally appeared on the Sussex imprint - a label that also gave US Dennis Coffey's Hair & Thangs, to name just one. While Cosby recorded a pair of albums as a singer, doing mainly soul and R&B tunes, and the hip, funky soundtrack themes he wrote with Herbie Hancock for the Fat Albert cartoon series, this set reveals some complex, killer jazz-funk. Cosby spends a good portion of his nearly 2,000-word liner essay talking about the death and funeral of Martin Luther King. The essay itself is worth the price of the album. Cos' intent here is to reflect the actual funeral of the slain civil rights leader and all of the very complicated emotions that ran through those waves of people in the march - in which he participated - and in the crowd. Musically, this piece begins with a slow, plodding bassline that morphs into something far more intense a little ways on. Studio bassist Bobby Hayes states, on his own website, that he was the bass player here, while Cosby's Rhodes piano offers a four-chord vamp, and some slowly building percussion gets infiltrated with electric guitars, horns, a Hammond B-3, reverb, a second bassline, and another guitar, all building for 20 minutes from sad reverence and mournful marching into stomping rage, and finally, into release and acceptance. The spirit of Miles Davis (la Jack Johnson) and Albert Ayler's modal marching music, along with Afro-Cuban and Latin percussion, are all here. When Big Black hits that bass drum, you can feel the tension begin to mount. It signals a few choruses for the percussion sections to take over for a bit, then Hayes cranks into "The Song of the Volga Boatmen" for a little while on his bass, and the horns begin to slip into long, singing lines, and the guitars get funky and edgy; you can feel the tune want to just explode. When it does, it's with a new vamp, turned inside out, and you can feel yourself want to march, shout, scream, pump your fist in the air, and feel the collective tension in the music wash over you. Yes, there is dissonance here, but it is all held together by the rhythms, and by Cosby's notion that harmony can be stretched and broken, but it can also be repaired, reconfigured, and then transformed. "Hybish Shybish," the other side of the equation, and side two of the LP, is a deep, funky, nocturnal groover all based on a four-note vamp. The bassline bubbles, Cos' Rhodes begins it's little vamp on the left hand and then begins to stretch itself into a solo; guitars whisper and curdle, and drums and percussion come from the background into the front of the mix. Think of in a Silent Way as transformed by Live-Evil. The horns blowing are all deep soul-jazz la Cadet and Prestige: economical but present. But when the harmonica gets into the mix (rumors are that it's Lee Oskar from War), the entire jam is some long, hypnotic Eastern groove-meets-Herbie Hancock's Mwandishi! The Rhodes and harmonica grooves atop all that percussion are glorious. Cosby says that he would signal different players in and out to solo. This is some psychedelic jazz fonk! Here too, rumors abound in the mysterious ethereal cloud that Badfoot Brown inhabits; many claim this was the Watts 103rd Street RH.