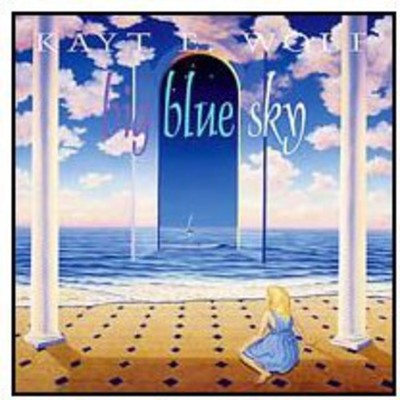 Important Note: This album will be in stock next week (the first week of February). The shipment of 'green' repackaged CD's has shipped from Nashville to Oregon on 1/29/09. The changing landscape of the music industry has opened the doors wide for artists who might not have had a chance only fifteen years ago. Kayte seized the opportunity at the very beginning of the indie label movement, and has since released over fifteen albums. Having sold over a million dollars worth of recordings, Kayte stays active as a songwriter in Nashville and her songs are now popping up all over the country as she continues to defy the odds. One of the songs on this album, "These Hands" was written by Dennis Bryon of the Bee Gees fame, and by Chris Pelcer who has most recently written songs in the forthcoming Yanni "Voices" tour. This particular song has been featured as an anthem for the Relay For Life in Bayonne, New Jersey with Kayte singing live as the survivors hold hands and sing along. The vast crowd of incredible "Baby-Boomers" in America see in Kayte Strong the same charisma and power to melt their hearts as their own heroes Carole King, Carly Simon, and Karen Carpenter. Kayte is to this generation and genre as Harry Connick Jr. is to the Frank Sinatra culture--an authentic reincarnation of the easy-listening music from the 70's. To the new gen, she is an authentic 'old school' artist. Kayte is blessed to be adding live concert performances to her touring schedule, which can be found on her website. These are real concert venues, all supported by her indie label, grants, and her fans. Most of the venues are 200-seaters, but in April Kayte is graduating to an 800-seat theater as her smaller performances are sell-outs. Beginning in 1995, after leaving her touring position with ITC Records and Pacific Concert Group, Kayte traveled for ten hundreds of thousands of miles by land and air for fourteen years-- winning the heart of America one city at a time. In 1999, her talent and professionalism landed her a position entertaining for Howard Alan Events, the premier Art and Craft festival company in the country, where she was one of five hand-picked artists performing for hundreds of thousands of people every month, year-round for eleven years. She reached out with her soul every weekend to the masses of people who were looking for uplifting, fresh, and beautiful music. The masses rewarded her by purchasing upwards of four hundred of her recordings every weekend. Her 2003 Christmas CD "Serene Noel" reached #96 on the independent airplay charts as a result of her incessant touring. Although Kayte has never chased airplay as a goal, she did reach her highest height yet last summer by having her music featured in the CBS series 'Swingtown'.