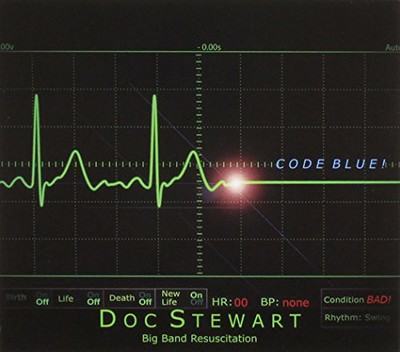 Those who subscribe to the notion that big band music is a dying musical art form, are obviously unaware of Doc Stewart and his star-studded Resuscitation big band that have just given the genre a shot in the arm, a jolt of electricity and some life-saving musical medicine with the amazing Code Blue! An alto saxophonist by passion and pleasure, Stewart is actually an emergency room doctor with the Mayo Clinic in Scottsdale, AZ, practicing the trade for the past twenty-four years while seemingly surgically attached to the saxophone. Music was initially Stewart's first calling but the love of playing took second fiddle to his interest in being a physician, yet jazz was never far from his mind nurtured by his interest in collecting and transcribing Julian 'Cannonball' Adderley solos which led to his previous recording of Phoenix: A Tribute to Cannonball Adderley (Cannonball Jazz, 2005). A hospital emergency code referring to a patient in cardiopulmonary arrest requiring immediate resuscitative efforts, this Code Blue, is Stewart's prescription for powerful big band orchestrations designed to get one on their feet and swinging! It also has some real life benefits as the project promotes Cardio Cerebral Resuscitation (CCR) which happens to save more lives than the outdated CPR. The doctor's previous history living and playing music in California before his medical days, serves him well here as he reunites with musicians from his youth, all of which just happen to have developed reputations as LA's finest jazz players. Stewart's alto and the nineteen-piece ensemble kickoff the music with a rousing four-part suite entitled 'The Code Blue Suite' featuring an array of spectacular solo performances from the doctor, trombonist of note Bill Reichenbach, trumpeters Jeff Bunnell and Wayne Bergeron. Paying tribute to the late great alto saxophonist Bud Shank, Stewart joins in with pianist Matt Catingub on the Tom Kubis tune, 'Homage to Bud Shank,' one of two gorgeous balladic pieces found on the recording. Two slightly Brazilian flavored scores are 'Patty's Bossa,' dedicated to his wife and the spicier 'Introduction to a Samba.' The band takes to old-styled swing on the Catingub-arranged 'Poor Butterfly' featuring a heated reed and brass section that helps define this band as muscular in nature. By contrast, 'Song My Lady Sings' is another soft ballad where the ensemble is gentle and the doctor is just as tender with his solos. The oft-recorded Jerome Kern standard 'The Way You Look Tonight' is one of the outstanding tracks of the album getting one powerful treatment from the band as this Catingub arrangement-featuring the entire orchestra as the main character-may just be one of the best around. The album closes with the dynamic Oscar Pettiford tune 'Bohemia after Dark' showcasing solos from trumpeter Ron Stout and versatile drummer Steve Moretti with the entire reeds in support. Check your pulse, because Doc Stewart's Code Blue! Is just what the doctor ordered, a powerful performance from an orchestra loaded with talent-rich players delivering the finest in big band jazz.

Here's what you say about
Doc Stewart - Code Blue!.