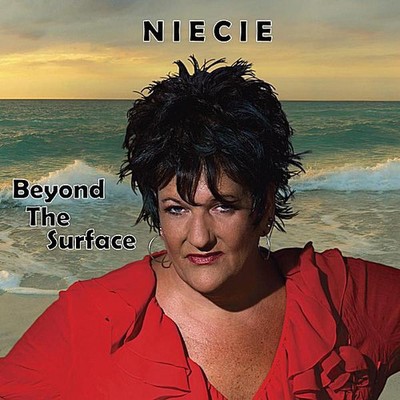 Press from Mick Martin, The Blues Party Niecie is a blues singer of the first order with impeccable taste in delivery and material. I can't play her songs on my radio show without getting a barrage of phone calls from listeners wanting to know, 'Who WAS that?!' -- Mick Martin, The Blues Party, KXJZ, Sacramento; KUOP, Stockton/Modesto; KKTO, Tahoe City/Reno; KQNC, Quincy; KXJS, Sutter. After hitting the charts, with her debut CD, 'Peace Of My Mind', Niecie's new release "Beyond The Surface" is another hit CD. The plethora of talent that resides on this CD is amazing. Some of the same musical greats laid it down on this release, Nioshi Jackson,(E.C. Scott, Scott Holt, Trisha Yearwood, Larry Carlton) co-producer and drums, Johnny Neel (Allman Brothers, Government Mule, Blue Floyd) on keys, Mike Durham (Dave Matthews Band) on guitar. Also on keys is jazz great Jody Nardone and Brian Gary (Eddie Money). On bass, thumping are Steve Forrest (Wooten Brothers), Calvin Turner, and Jerry Navarro (Charles Walker and the Dynamites), Additional guitars are Shaun Bayles, Shean Smith and the wailing Adam Agati. Tasty percussion and angelic background vocals are slammed by multi-talented Crystal Taliefero (Billy Joel, Bruce Springsteen, Bob Seger, John Mellancamp, Faith Hill). This CD also was mixed and mastered by John Billings (Donna Summer.) Niecie remarks, "There was so much love from everyone involved in Beyond The Surface. It blew my heart up! And the talent was incredible. I am truly blessed to have been amongst music industry royalty. Everyone rocked!" The songs on Beyond The Surface really reflect Niecie. About her favorite original, Niecie states " "Draw The Line" is a tune about getting to that point, taking no more, and not letting anybody or anything cross that line. When you've had enough. We've all been there!" And another original "Not No, Hell No" is about never going back. Moving on". She continues, "All the cuts represent where I am at. I am honored to have tunes from the great Grammy winner songwriters Kim Morrison and Ronnie Godfrey. Their tunes rock!" "I am ecstatic about my new release, Beyond The Surface" I'm even more excited to take it on tour and rock it for music lovers everywhere!!!

Here's what you say about
Niecie - Beyond the Surface.