Gail Marten - Beyond the Rainbow 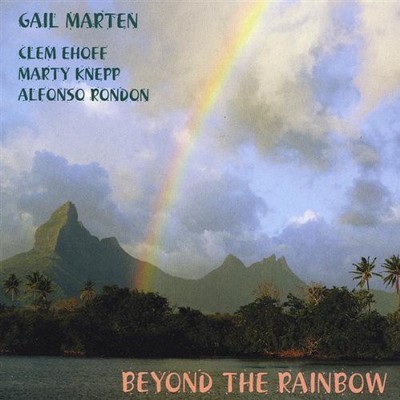 Gail Marten, vocals Clem Ehoff, piano Marty Knepp, drums Alfonso Rondon, bass Gail Marten has never sounded better. Beyond the Rainbow provides the perfect milieu for her velvety, seductive voice. 'She caresses a jazz vocal with the authority of authenticity!'...'A unique quality all her own.'...'She has a universal, classic appeal ...and she swings!' Irresistible, compelling rhythms for listening or dancing. The music is even more inviting than the cover photo suggests. It really takes you away. 'A distinctive sound.' Sensual, rhythmic renditions of beloved standards and exquisite original compositions. The sort of music that you never tire of hearing. Extraordinary musicianship graces this recording. You will be deeply moved by the sensitive treatments of ballads such as Over The Rainbow and Remembering Bill. The passionate interpretations of latin arrangements like Almost A Samba are nothing less than inspired. CLEM EHOFF & GAIL MARTEN have been named the WINNERS of the UK SONGWRITING COMPETITION in the Jazz Category for their song HEAVEN ON A TROPIC SHORE from their CD, PURE JOY. GLORIOUSLY BEYOND THE RAINBOW It is a distinct pleasure to hear an accomplished vocalist like Gail Marten, with tasteful pianist Clem Ehoff at the helm, and with first class rhythm players, Marty Knepp and Alfonso Rondon, keeping it all on tack! The mix of Ehoff originals and Marten singing gorgeous standards, makes this CD a treasure trove of sparkling wonders - enhanced by the wonderful display of nature's colors on the packaging. When should I listen to this...in the brisk of morning, to dispel the sounds of traffic en route to wherever...at afternoon siesta time...in the early evening time...and in the wee small hours...yes, every time of day and night! Gail Marten is as 'now' as a Cosmopolitan in a frosted beaker, and knows about singing...we all know what the intention of the lyricist is, when she delivers her song! Ehoff, who conceived the arrangements, graces the CD with his authoritative playing - never a slouch about asserting himself... Knepp's faultless and subtle drumming and Rondon's melodic bass, lay out a pulse which adores the pieces chosen. Ehoff's compositions alone would have been worth an entire CD...he has the knack of putting notes, phrases, improvisations, in a freely structured whole - the compositions are so seamless, that one thinks the music has been heard before...but it hasn't, it is unique to the composer, which he plays effortlessly. Did I like the CD? Of course I did... Tony Agostinelli, Editor The Network An International Jazz Newsletter January, 2001 Columbia resident Gail Marten has been singing in mid-Atlantic jazz clubs for more than 20 years. It's not an easy life, because there's not enough regular work to keep a band together, so a singer is often reinventing the wheel with a new cast of players. Marten, though, has finally stepped off this treadmill and has formed an ongoing partnership with pianist Clem Ehoff, a Baltimore jazz musician for 30 years. The pianist plays all her live gigs (including one in Columbia next week), arranged the nine standards on her new album, 'Beyond the Rainbow' (Shangri-La), and wrote four original tunes for the project. GAIL FORCE IS IN TOWN by Geoffrey Himes Columbia Flier July 19, 2001 Ehoff has crafted a sound that suits Marten's voice and savvy instincts. His understated piano phrasing, marked by open spaces and a leisurely swing, fits Marten's conversational, seen-it-all delivery. Her fascination with Brazilian music gives the songs a tropical, midafternoon languor, even supplying George Gershwin's 'Summertime' with a Rio beat and a breathy stoicism. ...Marten creates a memorable character through her songs - a woman who has seen too much to be naively romantic but who has enjoyed it too much to forgo love's pleasures. In Marten, Ehoff has found a partner who gives voice to the well-seasoned textures of his music. After several of her vocals a piano instrumental such as the Bill Evans tribute, 'Remembering Bill,' almost seems to sing beneath Ehoff's touch. 'She sings her formidable repertoire with warmth and sensitivity. Gail Marten has a universal classic appeal and presence...and she swings!' - The Jazz Goes Round 'Perfect tonality and impeccable phrasing... personality plus...a beautiful singer!' Benny Waters, Muse Records 'A wonderful voice...class pop jazz vocalist.' Mark Murphy - Muse recording artist '...Caresses a jazz vocal with the authority of authenticity...projects an innate awareness of how the songwriter might wish to hear the song sung.' Joe Godfrey - Syncopations 'I enjoyed her music immensely, in every aspect ... Wonderful music and performance!' Marilyn Cooley, Music Director - WETA-FM.

Here's what you say about
Gail Marten - Beyond the Rainbow.