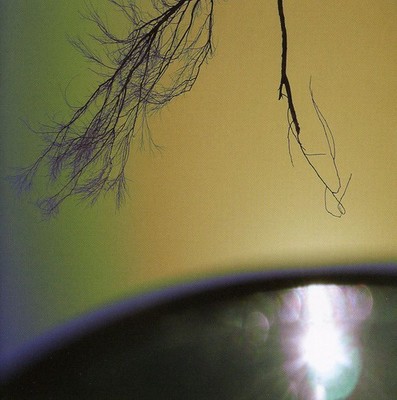 Those familiar with the work of Lycia already know that for founder Mike Vanportfleet, the desert has always been the ideal place to create works of frosty polar beauty. For from the barren sands of southwestern Arizona, Lycia was an oasis of cold and pure ambient post-punk from the late-80's up through the late-90's. It was an influential hybrid that had never existed before, and though often emulated, has never been rivaled. If one were to lock up the Factory Records roster at the Hacienda circa 1981, turn the A/C to freeze, slow down time, switch on a few dozen fog machines, and watch Vinny Reilly play with Cabaret Voltaire and The Wake until all were frozen in place like ice sculptures, that might be a close representation of Lycia's aesthetic. On Beyond the Horizon Line, VanPortfleet's first solo record post-Lycia, traditional rock structures are shed in lieu of shimmering, crystalline soundscapes. These are not the dense industrial furnace blasts one might expect from Lycia's founder. These are patient, glacially paced compositions. Much of VanPortfleet's signature glass-cutting guitar work has been replaced by loop manipulation, but there are still those beautiful ties to the old ghosts. Those moments where the angelic guitar tone breaks through the ice, coming up for air, as whispered voices and factory rhythms echo beneath the water of cleansing drone. VanPortfleet succeeds where so many artists fail, as he has translated his apocalyptic sound for a new generation of listeners without losing integrity or depth. It is a new path, but it is unmistakably VanPortfleet. His ability to adapt and progress and yet maintain his voice after nearly two decades of composing is what makes him legendary. Beyond the Horizon Line is a work of majestic misery, one of clarity, tension and resolve. One that mirrors the tone and alienation of the sparse Southwest. It was composed with the kind of patience one can only earn by years spent in solitary contemplation, and yet somehow so filled with humanness and beauty.

Here's what you say about
Mike Van Portfleet - Beyond the Horizon Line.