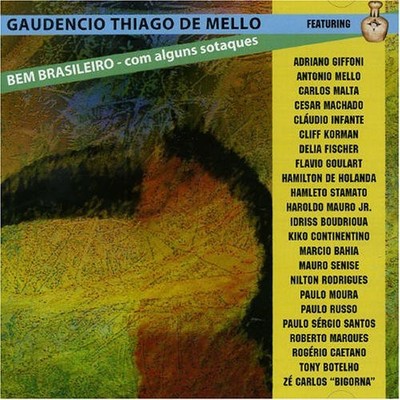 Thiago de Mello's music sounds like you were inside of an old, solid Amazon native canoe, side by side with a modern yatch going down the powerful Amazon River towards the Atlantic Ocean. Guess what? The canoe arrives there FIRST! ____ O "Saltimbanco" (tema com que comemorou 68 anos, em NY, em 2001) Gaudêncio, bem brasileiro, musicalmente é cidadão do mundo. (Tárik de Souza) ____ 'Words are not enough to describe the rare musical sensibility of Gaudencio Thiago de Mello and his creative percussion and brilliant compositions'. Luiz Bonfá, Composer of the winner film 'Black Orpheus' __ '...Thiago de Mello is a genius of percussion'. Jay Hoffman, WCBS News Radio N.Y.C., USA __ Founder of Thiago de Mello & Amazon, Thiago de Mello brought the influences of his homeland Amazon to his music, using instruments like the boca do mato, boca-de-barro and pau de chuva, built with pieces of wood and other rustic materials. He has had his compositions recorded by Paul Winter, Sharon Isbin, Paquito d'Rivera, Cláudio Roditi, Carlos Barbosa Lima, Tibério Nascimento and Richard Kimball. Mello participated in two records nominated for the Grammy Awards, Hearts & Minds, by Susannah McCorkle, and, as a composer, in Dreams of a World, by Sharon Isbin.Brother of the poet Thiago de Mello, Thiago de Mello (both use only their surnames) moved to New York NY in 1966, disturbed by the political situation in Brazil, debuting in the scene as a bossa nova performer in clubs of that city. In 1970 he founded the Guitar Society of the United Nations, having being it's director for the next 10 years. His Amazon (1973) had the participation of Dom Salvador (piano), Airto Moreira (percussion), Cláudio Roditti (trumpet), Paulo Moura (winds) and Don Payne (bass). In 1985 he participated in the Guitar Stream at the Carnegie Hall (New York, NY). In 1986 and 1987 he was a Paul Winter guest in his performances, being also a special guest to Carlos Barbosa Lima in his 1988 show realized at the Carnegie Recital Hall (New York NY), commemorating his 30 years as a professional instrumentalist. Three years later he performed again with Barbosa Lima at the St. John's Smith Square (London, England) and in Berkeley and Monterey (CA). In 1992 he participated in another concert at the St. John's Smith Square, this time with Barbosa Lima, Laurindo de Almeida and the Wren Orchestra of London. At the world ecological summit Rio Eco 1992 he performed in Rio de Janeiro with Paul Winter and Oscar Castro-Neves. With Sharon Isbin (guitar) and Paul Winter (saxes) he recorded Journey to the Amazon, with six of his compositions and also his arrangements. The album topped the world music charts of Tower Records, being elected by Downbeat as the best reissue of 1999. In 1998, his first LP, Amazon, whose master tapes had been destroyed in an arson, was recovered and reissued in Europe and Brazil, reaching the first place of the Tower Records world chart. Mello also wrote soundtracks for theater (The Well of Living Waters, The Visit, Exit The King, From Marti to Pietri, Growing up Gothic, Carioca, Twelfth Night and Broadway Melody 1492), cinema (Who Will Help Little Paulo and A Prairie Boys Winter) and dance performances (Recurrent Insomnia's/Managua). In 2000 he taught at the summer courses of the School of Music of Brasília, having performed at the National Theater of that city. In Rio de Janeiro he accompanied Ithamara Koorax in her show Bossa Nova Meets Drum'n'bass at the Bar do Tom.