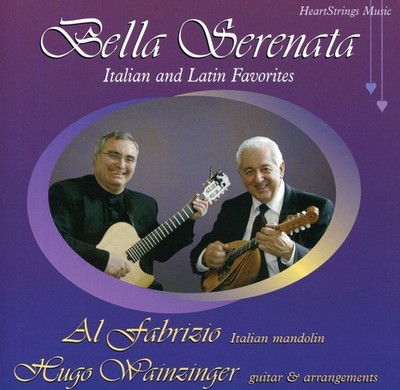 AL FABRIZIO Mandolinist Al (Anselmo) Fabrizio grew up with two musician brothers. His parents came from Italy (Abruzzi) to Cortland, New York. Al reminisces about his early days: 'It seemed like everybody played an instrument. In the evenings we would walk by our neighborhood and hear Nick, the barber, and his son playing clarinet classics and mazurkas. Our home was always filled with music-my mom singing in harmony to the radio, my brothers and I playing duets or trios, (I played clairinet then) and on rare occasions my father playing old melodies on a mandolin made by my grandfather. I've never forgotten those hauntingly romantic plaintive sounds.' For much of his adult life, Al left music behind for a career as a graphic artist. He owned Fabrizio Publications, a graphics and publishing company. He was also an art instructor for 12 years at San Jose State University and Foothill Community College. Interestingly, his career as a mandolinist did not begin until adulthood shortly after the sudden loss of his brother Raymond, a flute virtuoso. At that time, Al made a commitment to keep music alive in the family. With this in mind, he picked up his father's mandolin and seriously started a new career. Al explains, 'For me, the mandolin became a way of re-connecting with my heritage, my childhood memories. Al plays the Neapolitan mandolin in the expressive 'tremolo' style. He touches the heart of listeners taking them on a trip through the canals of Venice, the hills of Tuscany and the weddings of Sicily. With the completion of the CDs, 'Serenata Italiana', 'Italian Heartstrings' and 'Bella Serenata', Al's lifelong love of music comes full circle. His albums are receiving four star reviews with sales coming from around the world. His latest album, 'Bella Serenata', in addition to ten Italian love songs, added six Latin favorites. He is called a mandolin master in an article by Leigh Weimers of the San Jose Mercury News entitled, 'Shoppers Rejoice' in reference to Al perfomances regularly at Westfield Valley Fair Mall and at Santana Row in San Jose, California. Fabrizio is a co-owner with his partner, Hugo Wainzinger, of Heartstrings Music, LLC, a recording and production studio in Mountain View, California. Two of the studio's albums were nominated for the 'California Music Awards' (Bamies) for 2004. Al and his partner, Hugo, are often seen performing together at weddings, festivals and special events in the San Francsico Bay Area and California cities. ----------- Hugo Wainzinger Guitarist / Arranger / Composer HUGO WAINZINGER is a composer, guitarist, and arranger. Born in Argentina, he was exposed to a wide variety of music since childhood, largely through the influence of his mother, a passionate bolero singer. He absorbed many musical styles, making him uncommonly versatile as an arranger. A prolific composer as well as a wide-ranging performer, he spans the spectrum from classical to jazz to contemporary and world music. Frequently performing as a soloist, he also plays with both Latin and American artists at various Bay Area venues and festivals including the San Francisco Jazz Festival. In addition to his active career as a composer and performer, he engineers and produces recording projects at Heartstrings Studio in Mountain View, California. Among many recordings, he arranged and played the background instruments to the CD, 'Serenata Italiana' and the recent release, 'Italian Heartstrings'. 'I first met Hugo Wainzinger in 1992 through a mandolinist friend, Carlos Lopez, and we began performing as a trio. What impressed me about Hugo was his vast repertoire combined with his remarkable skill as both composer and performer. In the recording studio, his ear for mixing and mastering is unmatched. After more than ten years of working together, I never cease to be amazed by his musical genius. His songs (which number in the hundreds), are surely destined to be loved and sung by many.'- Al Fabrizio.

Here's what you say about
Al Fabrizio - Bella Serenata.