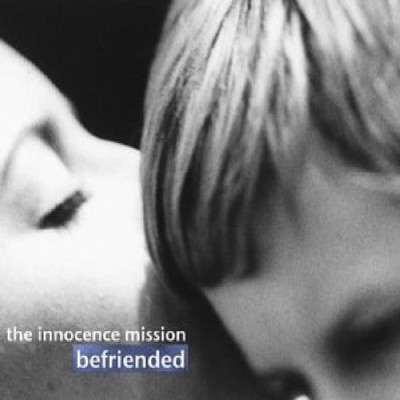 The Innocence Mission ~ Befriended The members of The Innocence Mission were still in high school when they became friends and band mates. Singer-songwriter Karen Peris, her husband, guitarist Don Peris and bassist Mike Bitts first performed together as the stage band for their Lancaster, Pa. Catholic school production of 'Godspell'. Through many recordings and tours, both on their own and with Natalie Merchant, Emmylou Harris and 16 Horse Power, the band has gained legions of devoted listeners. And they have grown immeasurably as songwriters, singers and musicians. Their new album, 'Befriended', on San Francisco indie label Badman Recording Co., is among their best and most compelling work. With ten new songs that are memorable and genuinely moving, the album continues t.i.m.'s progression toward intimate recordings where each note played and sung seems essential. Karen Peris' hauntingly beautiful voice communicates with immediacy. Her very visual, engaging lyrics have a rare emotional depth and a firm sense of place. Inside them the sadness of loss and longing coexist with hope and joy. A number of the songs seem to be tributes or elegies to beloved friends. In the cinematic opening track, 'Tomorrow On The Runway', Ms. Peris sings, 'Oh be the music in my head, the air around my bed, oh be my rest, replace the small disgraces of the times and places that I never really left.' In listening to these songs one hears echoes of regret and longing to change 'a beautiful change', and surprise at being befriended at all. Don Peris' ringing, tremulous electric guitar and Paul Simon - inspired acoustic guitar weave their own soulful melodies around Karen's voice. The tracks are further lit by Karen's bursts and lines of melodic piano, and they have a rich warmth owing, in part, to the combination of Mike's upright bass and Karen's baritone acoustic guitar. As with it's predecessor, the critically acclaimed, melancholic 'Birds Of My Neighborhood', the album was produced by the band and recorded by Don. In describing The Innocence Mission of recent years one writer suggested that we 'think of an American Astrud Gilberto making a record with Buffalo Springfield'. Their sound is somewhat unique to them and yet comfortingly familiar. It's naturalness has developed over years of growing and changing, and the members of The Innocence Mission admit it is hard to recognize themselves in their first, eponymous album. Of their singularly un-hip name, Karen says, 'It was so long ago that we chose it but I think the idea was that music can be a shelter, and music is something that is made with pure joy, with purity of intention, purity of heart'.

Here's what you say about
The Innocence Mission - Befriended.