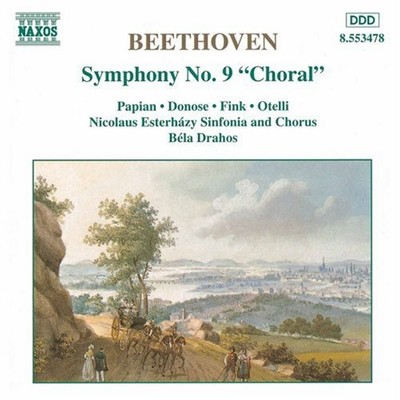 Beethoven wrote nine symphonies, the first heralding the new century, in 1800, and the last completed in 1824. Although he made few changes to the composition of the orchestra itself, adding, when occasion demanded, one or two instruments more normally found in the opera-house, he expanded vastly the traditional form, developed in the time of Haydn and Mozart, reflecting the personal and political struggles of a period of immense change and turbulence. The first performance of the Symphony in D minor, Opus 125, took place at the Karntnertor Theatre on 7th May, 1824, after a great deal of wrangling over the whole matter, and was a tremendous success with a public that Beethoven thought he had lost to Rossini. The composer, too deaf to direct the performance, indicated the tempi of each movement, the real conductor Umlauf having instructed singers and players to pay no attention to Beethoven, who could hear nothing of the proceedings. The work is scored for pairs of flutes, oboes, clarinets, bassoons, trumpets and drums, with four French horns and the usual strings, to which the composer added three trombones, a double bassoon, a piccolo, triangle, cymbals and bass drum. The symphony was commissioned and paid for by the Philharmonic Society of London, but was dedicated by Beethoven to the King of Prussia, Friedrich Wilhelm III. The last movement provides a necessary link between the purely instrumental world of the rest of the symphony and the great setting of Schiller's words. There is an abrupt outburst from the orchestra, now joined by the double bassoon, followed at once by a baritone recitative, an abjuration of orchestral convention and an exhortation to sing a song of joy. This is followed by the famous theme, in fact structurally the principal theme of a rondo, that is to be varied in so many ways. The baritone is joined by the chorus and then by the other three soloists in it's declaration of human brotherhood.

Here's what you say about
B La Drahos - Symphony 9.