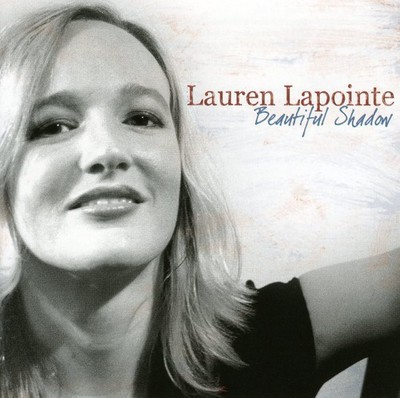 Lauren Lapointe's 'Beautiful Shadow' was recently featured on Georgia Public Radio which aired on 15 radio stations across the state. 'Impressive...emphasizing strong songwriting and showcasing Lapointe's rich alto voice.' John Stoehr, Savannah Morning News 'A mellow pop-folk vibe shaped by acoustic strumming, thoughtful lyrics, and Lapointe's subtly seductive alto voice. Produced by Kyle Shiver, who also adds tasteful accompaniment with his guitar, mandolin and vocal harmonies, eight of 10 tracks on 'Shadow' are Lapointe originals. On their own, any one of the eight original songs stands the test of a well-crafted composition. 'Beautiful Shadow' succeeds in creating a contemplative mood that fans of similarly styled girl-and-guitar pop, (MacLachlan, DiFranco and ilk) will appreciate.' Stuart Harmening, Savannah Morning News 'The latest release from Georgia resident Lauren Lapointe is truly turning heads in the music world. 'Beautiful Shadow' is full of wispy love songs, life journeys, and appreciation for the simpler things in life. Listening to this CD, you will find yourself spellbound by Lauren's melodious voice and captivating lyrics. 'Beautiful Shadow' is a powerful collection of ballads, full of life experiences, and definitely worth your time to pick up. Hit Picks: 'Beautiful Shadow' and 'Gypsy'' Heather Corcoran, GoGirlsMusic.com 'Folk rock goddess strikes gold.' Rocket Girl 'Resonant lyrics and a smooth voice...' Randy Carter, Savannah Fringe Festival Growing up in Eastern Canada, Lauren and her family moved around quite a bit, earning the nickname the 'traveling Lapointes.' This spirit of wanderlust continued into her adult years. She lived in Quebec City and Montreal, two of Canada's French-speaking cities, so that she could immerse herself in another language and culture. She backpacked throughout Europe, drove across the U.S. in her red Chevy named 'Cherry' and eventually settled in Savannah, Georgia. With a business degree under her belt and many navy-blue suits to her name, she worked for several years at her desk job. She eventually earned the coveted corner office. But she knew that something was missing. One Monday morning, she decided that life was too short not to follow her dream. To the great surprise of everyone around her, she gave her notice that very day. Her reason? She wanted to sing. 'But...you don't sing...!' was the stunned reply. She enrolled in sound design classes at the Savannah College of Art and Design and was coaxed by her fellow students and professors into recording some of her songs. This led to her first self-titled CD and within a year she was playing full-time at many bars, restaurants, and coffeehouses in the Savannah area. She has been a featured performer of the Savannah Folk Music Society and has opened for such national touring acts as Mindy Simmons, David Berkeley, Sam Shaber, Lauren Echo, Kyle Shiver, Mieka Pauley and Martha's Trouble. Before long, however, it was time to record a new CD. This time Lauren decided to work with producer Kyle Shiver, an acclaimed singer/songwriter who had made his major label debut as a background vocalist on Shawn Mullin's 'Beneath the Velvet Sun.' Her latest release, titled 'Beautiful Shadow' is a collection of 10 tracks that include 'Gypsy,' an upbeat song that captures the dreaminess and romance of the free-spirited traveler. The title track 'Beautiful Shadow' celebrates the quiet people and simple moments in life. A moving acapella version of the traditional 'Farewell to Nova Scotia' shows Lauren paying tribute to her Canadian roots. The Savannah Morning News has described 'Beautiful Shadow' as 'impressive...emphasizing strong songwriting and showcasing Lapointe's rich alto voice.' An interview with Lauren was recently featured on Georgia Public Radio's 'Georgia Gazette,' which airs on 15 public radio stations throughout the state. The show also included excerpts from 'Beautiful Shadow.' This year, Lauren, who has 'taken over the local acoustic scene,' according to a Savannah newspaper, plans to tour the country. Lauren's engaging live performances highlight her strong yet sensitive voice, wide vocal range, and warm and light-hearted stage presence. She writes all of her soul-stirring songs, which are based on her experiences and those of the people around her and strike a universal chord with many of her listeners. She's finally found a voice for her gypsy nature and uncommon insight through her unique and sultry songs.

Here's what you say about
Lauren Lapointe - Beautiful Shadow.