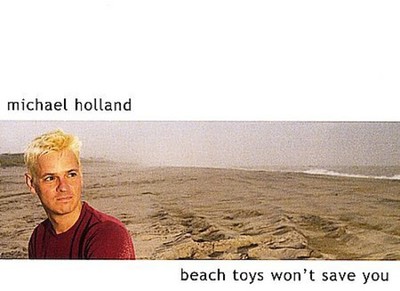 And then there were four. 'Beach Toys Won't Save You,' New Yorker Michael Holland's fourth solo CD, picks up where the previous one ('Darkness Falls') left off: smart, indelible pop with impeccable production values. This time, real strings and horns join the mix, as Holland adds 'engineer' to his already burgeoning job description (along with producer/arranger/writer/instrumentalist/singer!). Whereas 'Darkness' was mostly a brooding, introspective affair, the mood of the new disc is overwhelmingly upbeat, though no less quirky. Styles as diverse as Beach Boys-type surf rock ('Beatrice's Boyfriend') coexist with Latin-flavored pop ('Sin'), cool jazzy pop ('Wish You Were Here'), and just plain ol' rock'n'roll ('Boys Say Go'). Not to mention the insane number of notes this guy sings. His last CD (entering it's second printing this winter) garnered rave reviews and several awards, including a Blockbuster/MP3 Award for Favorite Male Performer, Rock. An evening of Holland's songs, performed by 16 of New York's finest singers, entitled 'Mikey Writes It!', won the 2003 MAC Award for Best Revue. Holland performs nationwide, mostly in New York City, and most often with musical conspirator Karen Mack, in their wildly popular and multi-award winning 'Gashole!' series of shows. In addition to his solo CDs, Holland also appears on 'The Maury Yeston Songbook,' released in spring 2003, along with Betty Buckley and a host of Broadway luminaries. Not exactly sure how that happened. He has three cats, and they are very bad.

Here's what you say about
Michael Holland - Beach Toys Won't Save You.