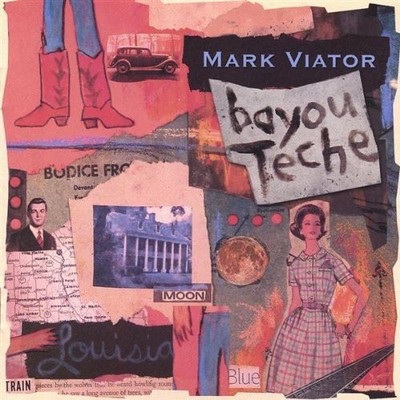 Austin, Texas guitarist and songwriter Mark Viator antes up with his first solo CD, Bayou Teche, a collection of songs that covers the territory from his ancestral roots in southern Louisiana to his home in Austin. Co-produced by Jane Gillman (Gillman Deaville, Rue La-La, Eaglebone Whistle) and recorded by Eric Blakely, Bayou Teche is a dose of swampy soul, folk, and acoustic blues featuring Viator's masterful acoustic and electric slide guitar work, a piece of Americana, with story telling rich in evocative southern moods. Bayou Teche features ten original songs and one co-write with Slaid Cleaves. From the Levon Helm-like opening track laced with electric slide guitar, to the full-on fiddle and accordion two-step of Cajun Bal, through the bottleneck delta blues of Blood Stained Letter, the National steel echoes of The Return of Gypsy Jack, Viator takes us on a journey through his Louisiana and Texas homelands. Joining him is a collection of great Austin players, including Charlie Larkey and John Main (bass), Eric Hokkanen and Peter Schwarz (fiddles), Ron Erwin and Paul Pearcy (drums), Jane Gillman (harmonica, mandolin and vocals), Susan Maxey (vocals), Rich Brotherton (guitar), Lisa Mednick (organ) and Serge Laine (accordion). Slaid Cleaves and Marcia Ball make guest appearances. Mark Viator's work as a sideman in Austin reaches back to 1991 when he played with Slaid Cleaves and held down guitar duties on his first two Austin releases. He also was bandleader and guitarist in all three of Bobby Bridger's Ballad of the West epics and has worked as a sideman with such folks as Jim Stringer and Steven Fromholz. Viator's most recent project was the Cajun folk band Rue La-La, with Jane Gillman and Marce Lacouture. They played throughout the Austin area, as well as the Kerrville Folk Festival and tours of south Louisiana (where they shared the stage with Sonny Landreth) and Quebec. Their Sky on Blue CD was released in 2000. _____ 'Absolutely great album ... wonderful acoustic journey from the roots of Louisiana to the best of Austin's singer/songwriter scene ... and it's still growing on me!' Gerd Stassen 'Hillbilly Rockhouse' Germany 'You'll understand that we were pretty excited when we first played this new CD in our car. Result: the CD case went around for 45 minutes from front seat to back seat and back to the front seat. Everyone was sold, starting with the 1st song, the quiet title song, also because of Marcia Ball's accordeon. And it didn't stop; starting with Cajun Bal, an acoustic two-step, that honors it's title and that works very well because of the lovely way that Peter Schwarz's fiddle, Serge Lainé's accordeon and Mark Viator's slide guitar play together, on top of Slaid Cleaves' vocals. We call this 'irresistable'. Viator's guitar playing is impressive, both on the slide guitar (sounds like the early Sonny Landreth) or when he is just plucking away. This becomes very clear on the 2 instrumental songs, but also on the other songs, where the guitar is doing wonders. 'Bayou Teche' is ... something I recommend to you, I mean NO, something that I absolutely HAVE TO recommend to you.' CD Review Rootstown Music Review The Netherlands 'The songwriting and guitar playing on this CD capture that 'bayou' feeling. The musical imagery is perfect.' Teresa Sansone Ferguson KUT Radio, Austin 'Stunning guitar playing, especially in the slide department!' Massimo Ferro Highway 61, Italy 'It's a gorgeous record with some folk, some pop, some cajun, some blues and a lot of fine slide guitar playing.' Theo Oldenburg Alt.Country Cooking, the Netherlands Four & 1/2 Stars ... 'Mark Viator's solo debut is a jewel.' Ctrl. Alt. Country Belgium Top Twenty ... Roots Music Report, US Folk Chart, April and May 2003.

Here's what you say about
Mark Viator - Bayou Teche.