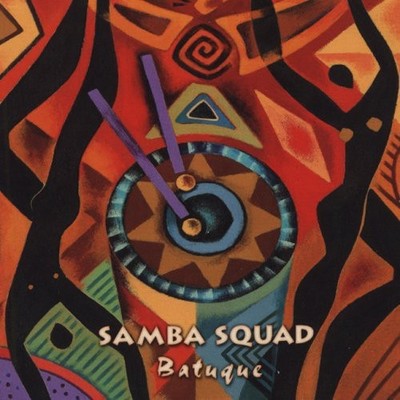 Batuque (baa-too-kee): From the Afro-Brazilian tradition, spontaneous street party: a celebration of life with drumming, singing and dancing. Toronto's percussion posse Samba Squad released their long-awaited sophomore album Batuque (baa-too-kee) to a sold out crowd at the Mod Club last September. Produced by one of Canada's unsung musical heroes and the founder of Samba Squad, Rick Shadrach Lazar, Batuque is an evolution of the group's musical journey: the path of the drum. Based on the Brazilian tradition of samba, the Squad takes you on a dance-till-you-drop tour of global grooves. Cutting-edge innovations fulfill the "beat migrations" created by the African diaspora. Afro-Brazil, Afro-Cuba, North and West Africa as well as elements of funk and hip-hop are melded into a raw, organic whole through the Squad's 14 original tracks, which bust out in energy and excitement. Several of Toronto's most accomplished musicians and soulful singers join Lazar and Samba Squad to create a veritable laboratory of global rhythms. Special guest vocalists and instrumentalists include Alberto Alberto, Armando Borg, Eliana Cuevas, Levon Ichkhanian, Jason Jackson, Laura Mae Lindo, Eder "O" Rocha and Gordon Sheard. Lazar's open-door philosophy means that Samba Squad has become a microcosm of multicultural Toronto and one of the most exhilarating live music experiences in Canada, featuring members of all ages and backgrounds. Remarkably, most are non-professional musicians whose raw talents Lazar has encouraged and shaped. 'The joy that they bring to it, that's what you can't buy,' he says. 'That's infectious.' In the past eight years, Samba Squad has risen from a community-based drumming group into one of the most dynamic and sought-after acts on the Canadian World and Latin music scenes. The music of this remarkable rhythmic collective is also the subject of Samba Squad: Drums We Love, a Riddle Films documentary, which had it's world television premiere on VisionTV on September 28, 2006.

Here's what you say about
Samba Squad - Batuque.