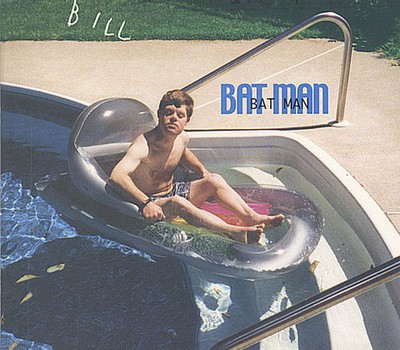 BILL are a rock band, started in 1987 in new england and fronted by Bill Gage, a singer with ds (down syndrome). The group was named after one of the few words Bill can write, making it simple for him to create the logo. Bill Gage sings surreal, ever-changing lyrics in a wide variety of styles... bluesy yowls, soulful moans, punky shouts, romantic crooning, throat-singing and more. These different approaches reflect Bill's reactions to the diverse sounds his bandmates provide him: spacey art-rock, thundering heavy-metal, acoustic folk ballads, stuttering industrial riffs, etc. BILL's approach to songwriting is always in flux. The first album BEATLES CHINESE was shaped by a series of challenges the band gave Bill: first to name the songs he wanted to do, and then to sing them, as the band figured out what to play behind him and each song was quickly recorded. The backing tracks for BILL's second record BAT MAN were recorded in advance. Bill listened to the tracks, sang over them, and then named the songs (and the record). The band includes Daren Follower, Eric Morin, Gaylen Moore, Greg Ansin, and Bill's brother john (who runs this page). People may come to the BILL show the first time to see what the hubbub is about, but they return for the rock spectacle. Bill Gage is a born performer, and his connection with an audience is immediate and electric.

Here's what you say about
Bill - Bat Man.