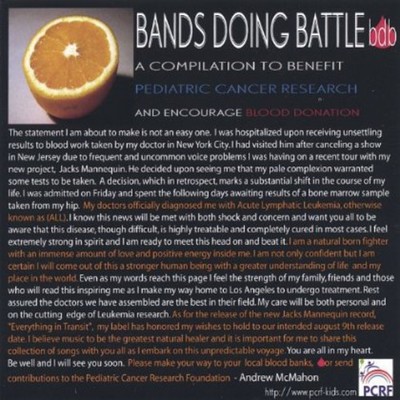 Rockers Band Together For A Good Cause By Curtis Ross of The Tampa Tribune Published: August 3, 2005 John Reisinger has united battling bands to fight a common enemy. The foe is cancer and the weapon is 'Bands Doing Battle,' a compilation CD featuring 19 Sunshine State bands performing on the Florida dates of this year's Warped Tour. Proceeds from CD sales will go to the Pediatric Cancer Research Foundation. Each year, bands compete to play on the Warped Tour's special stage for unsigned acts. Four bands perform on the stage at each tour stop. In June, Reisinger, 49, of Tampa was following the progress of his son Matt's band, Select Start, which eventually made the cut and will play today at Vinoy Park in St. Petersburg. It was then he came across an Internet posting by Something Corporate singer-pianist Andrew McMahon. The Southern California band is signed to the influential punk label Drive-Thru and is a veteran of Warped. 'The statement I am about to make is not an easy one,' the posting read. McMahon went on to write that he had been diagnosed with acute lymphatic leukemia. He went on to ask fans and friends to donate blood and to give to the Pediatric Cancer Research Foundation. Reisinger felt compelled to use the battle of the unsigned bands as a springboard for a more important fight. He contacted bands selected to play the Florida dates, asking them each to donate a song for the compilation. In return, he put up the money for the CD. 'That's my donation. I'm not taking anything back,' Reisinger says. He's also donated considerable amounts of time and energy, soliciting bands, handling the logistics of compiling and manufacturing the disc and networking with sponsors and other charities. One sponsor, Florida Blood Services of St. Petersburg, gave donors tickets to a show held Sunday at St. Petersburg's State Theatre, which featured bands from the compilation. Florida Blood Services also entered donors in a drawing for Warped tickets. 'Bands Doing Battle' features tracks from Tampa area bands Select Start and Crooked Edge as well as Jacksonville's Whole Wheat Bread, which is picking up a national following. All the bands are playing Florida dates of the Warped Tour. The CD also includes a track from Los Angeles band Bleed the Dream, whose drummer, Scott Gottlieb, died of cancer in April, not long after checking himself out of the hospital to record drum tracks for the band's 'Built by Blood' album. 'Bands Doing Battle' will be available for sale at all Florida Warped Tour dates. Reisinger says he hopes to have the CD in Florida Hot Topic stores as well.

Here's what you say about
Various Artists - Compilation to Benefit Pediatric Cancer Research &.