DVD Back Where We Began Live 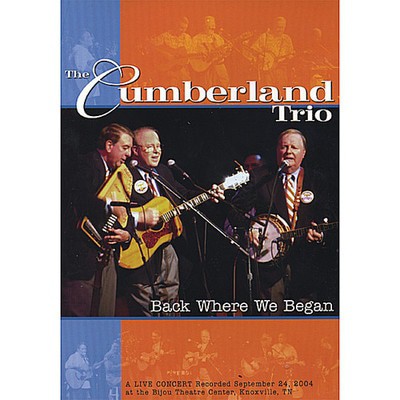 The Cumberland Trio, a famed folk group that originated in the '60s Folk Era and almost became the first big time folk group coming out of the Southern USA, reunited on September 24, 2004 at the historic Bijou Theatre in Knoxville, TN, for a 2nd official Reunion Concert, 'Back Where We Began,' which was captured for DVD in digital stereo and fabulous SEVEN camera color video (also available in 2 Disc CD right here on CDBaby), is a 27 song, 2 1/2 hour rousing concert happening, featuring a raucous and appreciative sold out SRO audience!! This DVD has been selected by PBS for national showing to all it's USA affiliate stations!!!! PBS officials have stated that this new DVD is far superior to the folk era 'reunion type' concerts shown on PBS over the past three years!!!! This new DVD has been praised by such Folk Icons as Mike Kirkland of The Brothers Four and Roger McGuinn of The Byrds as a Landmark Folk Recording that should be in all 'folkies'' collections. The Trio appeared on three episodes of ABC-TV's prime Saturday night music show, 'Hootenanny,' in the mid-'60s and broke up in 1965 after the British Invasion. The ORIGINAL Trio, Andy Garverick, Jerre Haskew & Tom Kilpatrick, reunited again in 2004 for this special concert and continue to perform today to sold out audiences at intimate venues across the USA, as well as at large, multi-genre music festivals. The live, energetic and entertaining Concert features a wide variety of songs, spanning the generations from the Folk Boom of the '60s to the present. To categorize this band's music genre is almost impossible, as it's music consists of folk, hard-driving folk/bluegrass, folk rock, reggae, blues, pop, classical and traditional Southern gospel. This landmark DVD features the three Trio members'unique solo voices and close harmonies and each member's own trademark styles. Instrumentally, the DVD features great innovative driving and soft Scruggs, chromatic, rhythm and frailing banjo styles of Andy Garverick, the amazing unique lead/rhythm guitar and autoharp of Tom Kilpatrick, the high end guitar and banjo rhythm of Jerre Haskew, the high end acoustic upright bass and comedy routines of original Trio bassist Jim Shuptrine, the solid bottom of Bob Wilkerson on electric bass, the versatile chops and solo breaks of Don Cassell on mandolin- and most importantly, the almost unbelievable dobro of Lou Wamp, appropriately nicknamed the 'Wizard of String' by his peers, who is recognized as one of the top 3 dobro players in the world. Lou also plays in his multi-talented unique style on violin/fiddle, cello and mandolin in this incredibly varied musical experience. In addition, the famed singer/songwriter (Susan) Taylor Pie appears as guest artist performing three of her signature songs backed by the Trio and band, including 'Time,' which was # 1 on the Billboard POP charts in 1968. Both Taylor Pie and Lou Wamp have their own great CDs available right here on CDBaby! Lastly this concert is incredibly entertaining, featuring funny songs, 'Sam' the Lion and Famed University of Tennessee football mascot, 'Smokey' in lively and fun interaction. In short, it's a really good time created by a great group of singers and musicians fueled by an enthusuastic audience that loved them back! The group first reunited in 2000 with the release of it's landmark 1964 RCA folk LP, 'The Cumberland Trio,' (cover picture from ABC-TV Hootenanny in Jan, 1964) produced by the legendary guitarist and producer Chet Atkins and brilliantly remastered to CD by Steve Wallace of CWSMultiMedia.com (also available right here on CDBaby)and has recorded two live reunion concerts (2001 & 2004 both now available on CDBaby- 2001 in 2 Disc CD and 2004 in both this newly released DVD and 2 Disc CD) and is performing concerts at selected music halls & major multi-genre festivals across the USA. Their music is being played on major NPR/ Americana/ Bluegrass/Folk music radio stations across the USA and in Europe. PBS broadcasted the Trio's this 2004 2nd reunion concert DVD within Tennessee in December of 2005, as well as acquiring the rights to syndicate it to all PBS affiliate stations throughout the USA in 2006-2007.

Here's what you say about
DVD Back Where We Began Live.