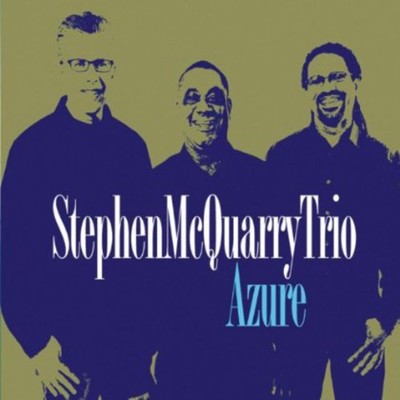 The Stephen McQuarry Trio-Azure In his career, Stephen McQuarry has been usually heard with larger groups, writing music and playing with big bands, nonets and octets. His previous recording Introductions found him writing inventive arrangements for Resonance, a unique band consisting of a saxophonist, flute, violin, viola, cello, bass, drums and his own piano. However Azure is something much different, a trio set that gives listeners the opportunity to hear Stephen McQuarry's talents as a pianist being fully showcased. "I had been mostly writing for larger ensembles," says Stephen, "but decided that I should also adapt some of my modal-informed compositions for my trio since we were playing jobs. It ultimately seemed logical to record the tunes with the trio." The pianist first met bassist Ted Burik ten years ago. When while playing "Autumn Leaves" they both quoted liberally from Keith Jarrett's version, they bonded as musicians. Stephen met drummer Greg German at a jazz workshop five years agö. "It is a pleasure to work with Greg on original music because he can always quickly hear what he needs to do and he fits in perfectly." Both musicians add a great deal to Stephen McQuarry's music, giving the music swing, taste and a strong base on which the pianist can improvise freely. Azure begins with "Blues For Jack," the first of Stephen's 10 originals. Named after a friend who is a blues guitarist in Boulder, Colorado, "Blues For Jack" has a melody line and chord voicings that are a bit influenced by John McLaughlin. The swinging piano solo (which at one point quotes from Thelonious Monk's "Straight No Chaser"), concise bass improvisation and drum breaks act as a fine introduction to the trio. The title cut "Azure" originated out of a piano improvisation from a club appearance that happened to be recorded. The complex medium-tempo ballad features Stephen's fresh and original chord voicings. "Lunar," use the compositional technique of inverted melody and chord changes, as the tune is based on 'Solar', which includes creative piano and bass solos. The next three selections pay tribute to specific artists, but in Stephen McQuarry's own style. "Little Brown House" is inspired by the writing of Tadd Dameron in it's linear line and harmonic progression. Although a bit more modern, the piano solo could be considered classic bebop. The jazz waltz "Sunday Afternoon" is influenced by Bill Evans although part of the piece is also reminiscent of John Coltrane's "Giant Steps." "I originally wrote 'Azadeh' for three horns. It is inspired by Herbie Hancock and can be thought of as a type of extension of 'Maiden Voyage.'" As can be heard throughout this CD, while he may be paying homage to other musicians, Stephen McQuarry sounds quite original throughout. His conception and his sound are very much his own. The sensitive ballad "A View From My Heart" is followed by "You Never Know," a boppish tune in the style of Charlie Parker. The title of "34 Miles Away" is inspired by Joe Zawinul's "74 Miles Away." Since the latter was in 7/4 time and Stephen's new piece is in 3/4, the title of his piece is logical. The song has nods towards Chick Corea and Bill Evans while being full of subtle surprises. Azure concludes with "Lydia," an original in the Lydian mode that is inspired by Clare Fischer. Stephen switches to electric piano and joins in happily to create the feel of a Brazilian samba, bringing the CD to a joyful close. Born and raised in Denver, Stephen McQuarry remembers hearing his mother playing classical piano in their home. "As a kid I naturally gravitated towards the piano. I took piano lessons starting when I was six, but because I changed the harmonies and 'improved' the music, my teacher suggested that I get a jazz piano teacher. I had the opportunity to play straight ahead jazz with older musicians while I was a teenager." He studied composing, arranging, orchestration and recording techniques at the Eastman School of Music, the University of Colorado at Denver, Berklee, the University of California San Diego and Alexander University. Stephen also had opportunities to perform with Dizzy Gillespie when he was 17 ("It was a wonderful experience because Dizzy was so down-to-earth, acting like he was a friend of ours"), Clare Fischer, Louie Bellson and Red Rodney. Since that time, Stephen McQuarry has been very active as a pianist, arranger-composer and a recording engineer. Among the groups that he has been involved with have been Zazen (a modern jazz group in the vein of the Keith Jarrett Quartet with Dewey Redman), the electronica band Synsor, the New Age group Agharta, and the eclectic jazz octet Resonance. For the future, he plans a new album in which every selection utilizes different instrumentation, ranging from a string orchestra and a big band to a vocal ensemble. Now that he has released Azure, his definitive recording as a pianist, Stephen McQuarry plans to perform more extensively with his trio, very good news for fans of inventive modern jazz piano. Scott Yanow, author of 11 books including The Great Jazz Guitarists, The Jazz Singers, Jazz On Film and Jazz On Record 1917-76.

Here's what you say about
Stephen McQuarry Trio - Azure.