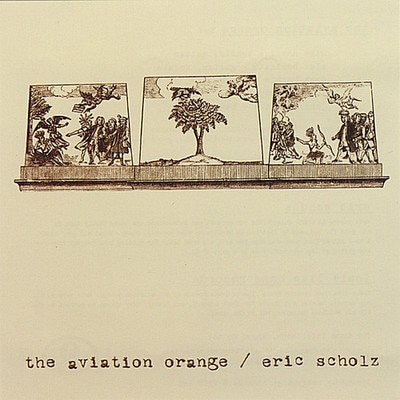 The Aviation Orange bio. Somewhere in Brooklyn, in a small and unheated rehearsal space, you can find The Aviation Orange tinkering away. Brought together in 2007 by the arrival of two new members - and the purchase of some vintage synths - the band set out to create a sound that reflected their varied tastes. The results are songs that don\'t all fit into the same formula. Displaying influences ranging from brit-pop to new wave to shoe-gaze, the band has created it's\' own style of guitar driven synth rock. Eric Scholz bio. Growing up in a small town of North Carolina, Eric Scholz found his first guitar tucked away in his father's closet. Writing on that same guitar for the next fifteen years he would be inspired with songs like "Stolen Car" and "I'm On Fire" by Bruce Springsteen. After hearing "Black Eyed Dog" and "Which Will" by Nick Drake he experimented with alternate tunings. At open mic nights he developed a sound of his own and has played in various venues along the east coast. In 2003, Eric Scholz independently recorded and released Leaving Left which had airplay on 88.5FM WMNF in Tampa, FL. In 2006, he completed his second effort, the Food for Sharks EP which received local attention in Raleigh, NC where he now calls home. Improving on his projects are live performances where he is often compared to a young Bruce Springsteen, Ryan Adams and Jacob Dylan. Ronny Elliot, a legendary artist and singer/songwriter based in Tampa, Fl caught one of his shows and had this to say: --"I\'m spoiled. I was raised on Hank Williams. Elvis changed my life and The Beatles finished me off. Not much knocks me out. I suppose that I\'m jaded as well as spoiled. Eric Scholz knocks me out, pins my heart to the back of my ribcage. His music and his delivery are as fresh and honest and real as anything that I have ever run across. I\'m glad to have stumbled over such a talent while he\'s still playing venues where I can sit upfront". --Ronny Elliott After reviewing Eric Scholz's 2006 release, the Food For Sharks EP, Matthew Hayhurst of the online blog, The Perm & Skullet, had this to say: --"If acoustic guitar and balladeering are your thing, than I may have tripped into the gold mine. In my own back yard, and mentioned to me by a good friend, sits Eric Scholz and his latest endeavor, the Food For Sharks EP. A voice that resembles the good qualities of Jacob Dylan\'s voice with touches of early, post-punk Ryan Adams and a true sound of what American music in the south should sound like. This is a must listen." --Matthew Hayhurst, The Perm & Skullet.