Riviera - At the End of the American Century 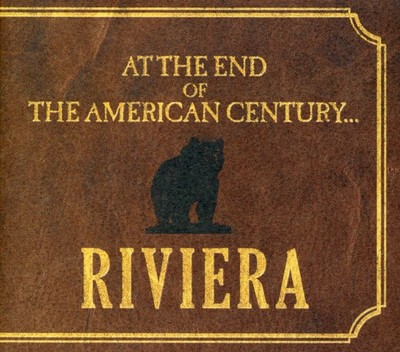 'One of Chicago's hottest rising talents.'- Chicago Tribune There is a palpable sense of paranoia that pervades At the End of the American Century, a feeling that we are living in a kingdom of fear. It's a weird time in America, and weird times have historically produced great art. The first full-length album by Chicago five-piece Riviera is the latest example of that phenomenon. Riviera's musical palette contains shades of artists you already love (Neil Young, Rolling Stones, George Harrison) blended together with colors unique to each of the band's three singer-songwriters. Riviera was founded in the thriving Chicago music scene in 2000. Through personnel changes and musical shifts, the band has created a sound that is grounded in American folk and rock with electronic overtones and feedback. Singer-songwriter Derek Phillips formed the band in an attempt to bring together the elements of American music that had grabbed his attention over the years. His lyrics paint colors rather than shapes in your mind and leave you with feelings that creep up on you days later. Lead guitarist Mick Radichel writes songs with a decidedly southern flair, though he hails from Milwaukee. Wide varieties of playing styles from Keith Richards to Smokey Hormel to Jim O'Rourke provide the bones to the songs. Josh Boisvert has a repertoire of material reminiscent of the lonesome troubadour. His piano and organ playing and harmonizing vocals round out the band's sound. Bassist Matt Usner brings folk sensibilities and quiet anchoring, while drummer Joshua Rogers lends the foundation with solid rhythm and unexpected flair. It's been a long road to this point and the band has characters along the way who one way or another make up the cast in their songs. Chicago has known about Riviera for a while, now it's your turn. Press on Riviera 'One of Chicago's hottest rising talents. While the idea of a Chicago alt-country outfit blending folkie chords with experimental soundscapes isn't exactly a new one, Riviera carves out it's own niche by adding a healthy dose of pithy lyrics worthy of Pavement's Stephen Malkmus. The four-piece, just over a year old, plays tug-o-war between polished indie-rock and campfire ballad-rock. The quintet's debut, Broken Hearted Dreams, is an excellent listen, just make sure you're wearing headphones; there's enough ear candy to last a while.' - Chicago Tribune's Metromix 'Riviera has a diverse musical palette, boasting three strong singer/songwriters backed by bass and drums. Derek Phillips, Mick Radichel and Josh Boisvert contribute to a cohesive sound with it's share of a rich variety of colors. Their collective wit is literate and wry, backed by rock swagger and a willingness to let a tinge of rock noise creep in occasionally (as on the leadoff track, 'Petrified Possessions'). Harmonica fuels the straight-up Americana pleaser 'Your American Past,' bleeding into the 70s-era, southern-tinged ballads 'Stranded' and 'Changing Channels.' Their recent appearances opening for Jeff Tweedy are well deserved, as a bit of Van Morrison and Wilco sweep across Riviera's breezy, yet gritty soundscapes.' - Miles of Music 'Riviera has definitely stayed a few nights in Wilco's Americana hotel. But their debut EP never let's it's influences lead the dance, instead dizzying them with literate doses of absurdist humor and liberal doses of the hidden hooch in that hollow bible.' - All Music Guide 'You will probably hear Riviera compared a lot to Wilco and other proponents of so-called 'Americana' but really, what 'At The End of the American Century...' is all about is richly textured melodies, creative uses of feedback and electronic washes and the exploitation of all the colors in their sonic palete to create some memorable and moody rock and roll.' - rockandrollreport.com 'While labels such alt-country or Americana certainly fit Riviera's sound, At The End of the American Century also borrows from 70's classic FM rock and the most accessible of contempory indie rock, covering multiple aesthetic touch points without the self-conscious dress code of hipster hang-ups...' - Blue Mag 'Riviera's sound runs the gamut of confessional country, wonderfully harmonised pop and '70s southern rock. A good (if slightly lazy) reference point is Wilco's Being There (1996), while at other moments they sound like My Morning Jacket without the cathedral-like reverb. This synthesis sounds remarkably fresh and coherent, which makes for an extremely enjoyable listen, especially since they are confident enough to let the inate energy of the songs carry them along; you get a sense that they're having a great time playing these songs.' - Off City Limits 'Riviera brags of three capable and diverse songwriters while their crunchy alt-country vibe keeps them playing songs they already love and nurture... Guitars peek out behind the music with subtle, eerie wailings, experimenting with silence and electronic noise to mix up the repertoire.' - Third Coast Press 'Each member of Riviera knows his instrument and it's roots in American music. There is an air of American Folk Art to what Riviera does; there is no room for the superfluous, the nonfunctional, and there is a sense of community in the way the band members play together, a sense of shared experience and purpose.' - Illinois Institute of Technology's TechNews.

Here's what you say about
Riviera - At the End of the American Century.